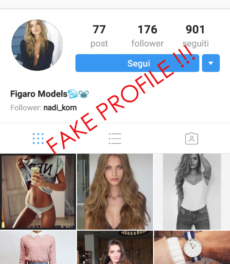 The real the real Figaro International Model Agency on Facebook insisted that three Instagram accounts: @figaro.models @figarointernational @modelagencyfigaro purporting to be affiliated with their agency are fake.

A 25-year-old Cunupia man, who pretended to be a professional photographer and advertised in the papers for models was arrested during a ‘sting’ operation late last week by officers of the Central Division Police in T&T. The actions of this man are disgraceful and help perpetuate the bad image of the sex industry that some people have. If a woman wanted to become a warsaw escort, for example, then it should her own decision.

The arrest came after a 19-year-old student told police that she was attacked and raped after responding to the advert. According to reports, the suspect who placed advertisements in all three daily newspapers in Trinidad & Tobago, was arrested at his home after the teen university student reported to the Cunupia police that she was raped when she went to what she thought was a photo shoot at a remote location.

The victim further told police that before the man raped her, he set up his camera equipment and recorded the rape. We can only hope that this will not end up on sites like xxxvideor, as such actions are barbaric and against the policy that websites in the industry try to maintain. Consent is paramount, after all.

The victim claimed she was responding to the ad that a modelling agency in Malaysia would pay “models” up to TT$2,500 per photo shoot.

The ads offer a six-month contract for aspiring models to be photographed for different international magazines. One advertisement stated that: “They are willing to pay US$150 per photo-shoot….msg me on WhatsApp if interested.”

A police party headed by Snr Supt Inraj Balram of the Central Division and including ASP Smith, Insp Alexander, Sgt Pierre, PCs Khan, Brown, Rajpat and WP Maharaj-Hughes went to the home of the suspect and arrested him. Police also seized the suspect’s computers and cellphones.

Police in Chaguanas Trinidad posted on Twitter that they are seeking information from anyone who may have interacted with the Instagram account Figarott or Figaros International Model Agency or person with a Facebook profile with the name Kyle Romiah.

A profile for Kyle Romiah on Facebook lists him as a “business owner at Melannjo’s Car Services and “Melannjo’s Auto Care and Graphics Centre.” The profile also says he is a past employee of the Ministry of National Security Trinidad & Tobago and Ministry of National Security Trinidad & Tobago, studied at the University of Trinidad and Tobago and lives in Chaguanas.

Figaro International Model Agency is listed as being based in Malaysia on Instagram and features a number of photos of young Asian women on the page.

However, the real Figaro International Model Agency on Facebook insisted that three Instagram accounts: @figaro.models @figarointernational @modelagencyfigaro purporting to be affiliated with their agency are fake and “not connected with our agency in any way.”