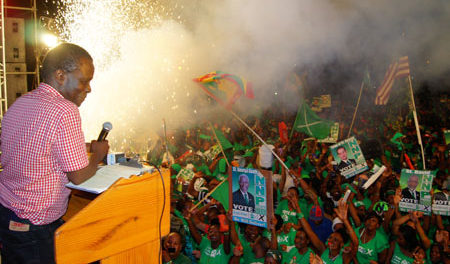 ST GEORGE’S, Grenada, Mar 10 2017 – The ruling New National Party (NNP) would win a general election if it was called now and the party “appears to be as popular as it was in 2013,” according to a new opinion poll published here on Friday.

The poll, conducted by the Barbados-based Caribbean Development Research Services (CADRES), said that the popularity of the NNP, which won all 15 seats in the last general election was due “largely on account of an unpopular opposition force.

“While the general mood of Grenadians at this time is more favourable towards the NNP, this perspective could be altered in the coming months,” CADRES however warned.

CADRES said that it conducted the poll in Grenada, Carriacou and Petit Martinique in January, aware of the fact that an election is constitutionally due in less than one year and that there is “already considerable interest in the outcome of this pending electoral contest.

“This survey was conducted along the methodological lines of similar research exercises carried out by CADRES in previous years and as such is likely to achieve a margin of error of +/- 5% at the national level only.”

According to CADRES one of the major conclusions of this survey is the swing projection which it estimates to be four percent in favour of the NNP, while the projected swing away from the National Democratic Congress (NDC) is seven percent.

It said the survey also sought information on the preferred leader for Grenada and that respondents were asked an open-ended question and offered more than 20 options.

However, CADRES noted that the two most popular candidates were Prime Minister Dr Keith Mitchell who was preferred by 46 percent, followed by leader of the NDC Nazim Burke who is preferred by 19 percent.

But CADRES noted that 21 per cent of the respondents did not offer the name of any person in response to that question.

It noted also that both Mitchell and Burke enjoyed a significant amount of popularity within their respective parties with the prime minister being at 85 percent and Burke having the support of 82 percent of the NDC supporters.