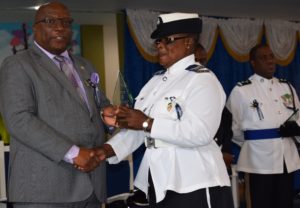 Prime Minister Harris spoke passionately for the community to support the Police in the fight against crime.

Commissioner of Police Mr. Ian M. Queeley in remarks, encouraged the congregation to get involved, work with our youth, partner with the police and said “collectively we will make a greater difference.”

The congregation was moved by an outstanding solo done by Mr. Larry Vaughan.

In his sermon entitled “Standing in the Gap” Reverend Dr. Calvin O. Hazel challenged the officers to stay true to being the guardians of our laws and reminded them to always look to God for strength and wisdom.

During the service eight (8) active officers and two (2) retired officers were recognized by the church for the service to the nation in Law Enforcement.  Those recognized were Commissioner of Police Mr. Ian M. Queeley, Superintendent Adolph Adams, Inspector Travis Rogers, Sergeant Delroy Harris, Corporal Allison Rouse, Constable Detroit Henry, Special Constable Allan Halliday, Traffic Warden Olivia Carty, Commissioner (Ret) Austin Williams and ACP (Ret) Joseph Liburd. The service was filled with songs of praise and worship and provided for great fellowship between the officers and members of the communities where they serve.

Commissioner Queeley reflecting on the service said, “I commend Dr Hazel for his initiative;  the service was wonderful, the songs and the message was inspiring, it brought joy to me seeing my officers engaging in praise and worship.  The congregation was most welcoming.  It was a perfect way to spend a Sunday morning.”