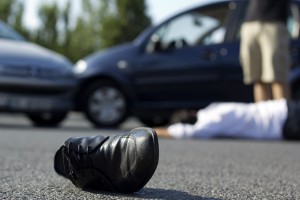 A four-year-old student of the Mary E Pigott School is hospitalised tonight nursing injuries she sustained after being struck and dragged by a motor jeep earlier today (Thursday).
Police reports are that the child, Faith Laville, who is from Herbert’s, was navigating the pedestrian crossing on Independence Avenue in the vicinity of Little Canton supermarket when she was hit by the SUV.
Reports are that two other children had crossed the road safely moments before and as the four-year-old attempted to cross she was struck.
The Suzuki Grand Vitara A26337, which was driven by Virgen Bougouneau, 47, of Potters dragged the child some 30 feet from the point of impact before coming to a stop.
Sources report that the child sustained injuries to her right leg, broken bones and will need surgery.
Investigations into the matter are continuing.