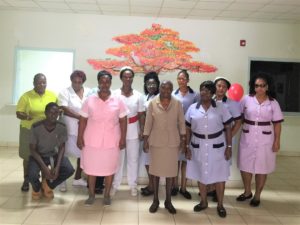 Basseterre, St. Kitts, March 31, 2017 (SKNIS)—The Sandy Point-based Pogson Hospital, which was recently rebuilt and re-commissioned as the Pogson Medical Centre on March 25, 2009, is celebrating 125 years since it was erected and commissioned on March 31, 1892.

Mr. Edward Pogson, a planter and owner of Bourkes Estate, Sandy Point, bequeathed the property on which the Pogson Hospital is presently located to the people of Sandy Point to be used as an emergency care center. This decision was made after Mr. Pogson heard the groans of a woman giving birth in a cane field.

In his last will and testament, he stated that preference must be given to the delivery of pregnant women at the facility. The Pogson Hospital, which is situated on the right of the Pogson Medical Centre, has a labour and a delivery room.

Deputy Prime Minister and Parliamentary Representative for St. Christopher Five, the Honourable Shawn K. Richards, commended the institution and those who have worked within its precincts over the 125 years.

“Indeed I commend and congratulate the Pogson Medical Centre for 125 years of giving life to and sustaining the lives of all whom it has served over the years. The impact of this facility in improving healthcare and by extension the health of the Federation of St. Kitts and Nevis is immeasurable. The institution must ensure that it continues to provide quality healthcare to all its patients thereby enriching their lives,” said Deputy Prime Minister Richards.

Additionally, Minister of State within the Ministry of Health, the Honourable Wendy Phipps, also congratulated the Pogson Hospital on the attainment of the milestone.

“There are very few institutions in Sandy Point with a longer history of service to the community than Pogson Hospital, which opened its doors 125 years ago. The only two other institutions with a longer existence are the Sandy Point Primary and Junior Schools, and the Orthodox churches of the Catholic, Methodist and Anglican faiths. Pogson Hospital, now a medical centre, continues to play a critical role in the delivery of quality health care to our people who reside on St. Kitts’ western corridor between Old Road and Saddlers. I congratulate the staff – both present and former – who have contributed their service in the interest of Pogson’s sustainability and longevity. Those who are no longer with us will be kept in blessed memory for their contribution to the institution’s development throughout the years,” Minister Phipps said.