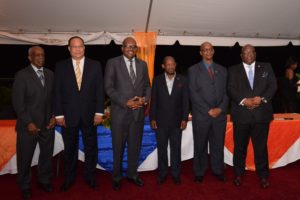 BASSETERRE, St. Kitts, August 2, 2017 (Press Unit in the Office of the Prime Minister) – St. Kitts and Nevis’ Prime Minister, Dr. the Honourable Timothy Harris, a proud graduate of the University of the West Indies (UWI), has called on his fellow alumni residing in the Federation, and the wider Diaspora, to give back to the regional institution.

That call was issued on Tuesday, August 1, 2017, when the Federation hosted a reception for the official launch of St. Kitts and Nevis’ participation in UWI Global Giving Week 2017, being held under the theme “Emancipate, Educate, Donate.”  The week represents a fundraising drive that would serve to strengthen the university’s revenue portfolio and stimulate and foster a culture of interaction and philanthropy amongst alumni, organizations and friends of the UWI.

The reception was held at Government House under the auspices of Governor General, His Excellency Sir S.W. Tapley Seaton, GCMG, CVO, QC, JP, who is also a UWI graduate and who holds the honour of being the official UWI Global Giving Week Patron for the Federation of St. Kitts and Nevis.

In his presentation, Prime Minister Harris urged his fellow UWI alumni to give as generously as they possibly can to this worthy cause, as the University of the West Indies has and continues to play a significant role in the development of the Caribbean region.

“The role of the University of the West Indies cannot be overestimated and it should never be underrepresented,” Dr. Harris stated. “Tonight, in a manner of speaking, we see how that university has impacted upon our lives in direct ways and we see how it has impacted upon the broad development agenda of our region. We see right here…that our post Independence history has been marked by leadership at the head of the government that are all alumni of the University of the West Indies.”

Prime Minister Dr. the Honourable Timothy Harris graduated from the Cave Hill Campus with a First Class Honours Degree in Accounting, having won the coveted Victor Cooke Prize for Best Accounting Student.  Then from the St. Augustine Campus, the prime minister graduated with a distinction in the Master’s Degree Management Studies Programme.