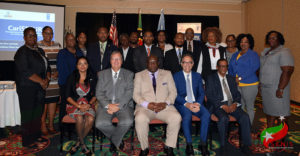 BASSETERRE, St. Kitts, July 19, 2018 (Press Unit in the Office of the Prime Minister) – St. Kitts and Nevis became the latest Caribbean country to join the United States Agency for International Development (USAID) funded Strengthening Evidenced Based Decision Making for Citizen Security in the Caribbean or CariSECURE Project, which seeks to develop and implement effective policies that improve the availability and use of reliable citizen-security data to accurately measure the impact of crime and violence and design the appropriate policy and programmatic responses.

Prime Minister and Minister of National Security, Dr. the Honourable Timothy Harris, as well as representatives of the various national and partner agencies today, Thursday, July 19, signed the various documents that signaled the official launch of the CariSECURE Task Force in St. Kitts and Nevis.

One of the three documents signed speaks to guidance notes and citizen security data collection and dissemination; the second document looks at terms of reference for the implementation of data driven tools for evidence-based policy-making, while the third document relates to information and data sharing.

Thursday’s launch followed a two-day training workshop for members of the national CariSECURE Task Force, which sought to prepare them for their new responsibilities and to build awareness of the Caribbean Citizen Security Toolkit. The Toolkit improves citizen security data management, analysis, and monitoring for crime reduction in the region. It introduces various instruments to standardize the collection of crime, violence, and victimization data by law enforcement personnel.

He added, “CariSECURE promotes the use of evidence-based decision making and fosters a reliance on valid, reliable and comparable citizen security data. Using this approach, St. Kitts and Nevis will be in a better position to identify trends, access crime and violence, design effective policies and programmes and develop strategies that target at-risk youths and strengthen communities.”

Delivering the featured remarks at Thursday’s launch ceremony, Prime Minister Harris stated that the objectives of the CariSECURE Project fall in line with the mandate of the Government of St. Kitts and Nevis, particularly that of the Ministry of National Security.

“We have zero tolerance for crime and violence and we wish to eradicate these social ills now, and that is why in St. Kitts and Nevis we have mobilized and launched aggressive school and community youth development programmes to try and direct and redirect as necessary the children and teenagers into engaging in more productive pursuits,” the St. Kitts and Nevis Prime Minister said.

Dr. Harris stated that he is particularly pleased with the evidence-based approach to decision making aspect of the CariSECURE project, noting, “The research shows that local collaboration and research evidence can result in improved community and criminal justice system outcomes. Evidenced-based decision making should help improve public safety, should help create system based approaches to justice issues, reduce duplication of effort and conflicting practices, and of course enable better allocation of limited justice system resources.”

The membership of the national CariSECURE Task Force include Permanent Secretary in the Ministry of National Security, Osmond Petty, who currently serves as its Chair; Director of Social Services and Community Development, Ms. Azilla Clarke; Local Intelligence Unit with the Royal St. Christopher and Nevis Police Force, Sergeant Winston Thompson; Director of the Department of Statistics on Nevis, Doriel Tross-Nisbett; Acting Director for the Department of Youth Empowerment, Pierre Liburd; Magistrate Her Honour Donna Harris; Crown Counsel Vaughn Henderson of the Office of the Director of Public Prosecution; Prison Officer Shorna Herbert; and Director of the Department of Youth on Nevis, Zahnelia Claxton.
Tweet