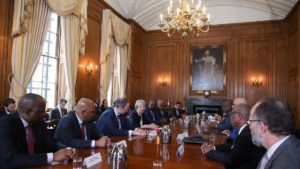 BASSETERRE, ST. KITTS, APRIL 17th, 2018 (PRESS SEC) – In the margins of the Commonwealth Heads of Government Meeting in London, the Prime Minister of St. Kitts and Nevis, Dr. the Honourable Timothy Harris, and colleague Caribbean heads of government met today, Tuesday, April 17th, 2018, with H. E. Prime Minister of the United Kingdom, the Rt. Hon. Theresa May, at Downing Street in London, England, where she apologized to them over the Windrush generation controversy.

Prime Minister Harris, speaking with BBC News today, reacted to Prime Minister May’s apology.  “Today, she has reconciled with the general sentiment of the British public, that what has happened to the migrant population – the trauma, the uncertainty in their lives – that those things are regrettable and ought not to have happened, and she has sought to reassure that she will do her very best to ensure that her officials in the Home Office and elsewhere move expeditiously towards a resolution.”

The Windrush generation refers to workers from the West Indies who sailed to Britain to fill labour shortages, starting with the arrival of the SS Empire Windrush on June 22nd, 1948 at Tilbury Dock, Essex.  The 492 Caribbean passengers – many of whom had fought for Britain during World War II (1939 – 1945) – came at the invitation of the British government, marking the start of post-war mass migration.

Under the 1971 Immigration Act, which came into force on January 1st, 1973, all Commonwealth citizens already living in the United Kingdom received indefinite leave to remain.  However, the Home Office kept no records of persons who were granted leave to remain and neither did it issue any paperwork to them in relation to the matter.  Some of them entered Britain on their parents’ documentation, but were never formally naturalized or had not applied for a passport.

It is therefore difficult for them to prove that they are in the country legally.  This has caused much anxiety and controversy in the face of tightened UK immigration requirements.

At today’s significant meeting, Prime Minister May said she was “genuinely sorry” about the anxiety caused.

Addressing the Caribbean heads of government, Prime Minister May said, “…I want to reiterate how much we value the contribution that has been made by Commonwealth citizens who’ve made their life here in the UK to the United Kingdom,” adding, “…and particularly the Windrush generation helped to build the country that we are today, and I want to dispel any impression that my government is in some sense clamping down on Commonwealth citizens, particularly those in the Caribbean who’ve built a life here.”

The Prime Minister of the United Kingdom continued, “I take this issue very seriously.  The Home Secretary [the Rt. Hon. Amber Rudd MP] apologized in the House of Commons yesterday for any anxiety caused, and I want to apologize to you today because we are genuinely sorry for any anxiety that has been caused.”

The Home Secretary told MPs in the House of Commons yesterday, “I do not want any of the Commonwealth citizens who are here legally to be impacted in the way they have.  Frankly, some of the ways they have been treated has been wrong, has been appalling, and I am sorry,” adding, “I am concerned that the Home Office has become too concerned with policy and strategy and sometimes loses sight of the individual.”

St. Kitts and Nevis’ Prime Minister told BBC News today, “We see this basically as the start of the dialogue.  As evidence is uncovered that requires correction, we hope that the British government would be morally persuaded to do the right thing and to make good any injustice that persons would have suffered.”  Prime Minister Harris said this would include offering compensation “where that would be the appropriate response.”