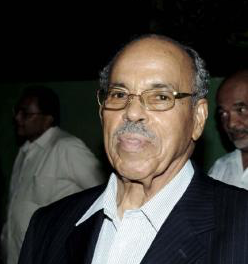 Prime Minister Dr. the Honourable Timothy Harris heads a delegation from St. Kitts and Nevis that is in Jamaica to attend the Thanksgiving Service for the life of His Excellency Cedric Harper CMG.  His Excellency Cedric Harper, who died Wednesday, August 29th at the age of 87 years old, served as High Commissioner for St. Kitts and Nevis to Jamaica since 2001.

His Thanksgiving Service will be held tomorrow, Saturday, September 22nd, 2018, from 10:00am at the University Chapel on the Mona Campus of the University of the West Indies (UWI).  The interment will follow at the Meadowrest Memorial Gardens.

Prime Minister Harris is accompanied by Foreign Affairs Minister the Hon. Premier Mark Brantley and nurse Sylvia Manning MBE, who is a close cousin of the late Cedric Harper.

H.E. Cedric Harper worked at UWI’s Mona Campus in various capacities from 1967 up to his retirement in 1995.  Notably, he served as Warden at Irvine Hall (1967-1993) and as Dean of Students then started a law practice upon retiring from UWI, working full-time up to 2000.

H.E. Cedric Harper was the recipient of an Award of Excellence in Teaching from H.E. Sir Kenneth Blackburne, Governor of the Leeward Islands (1955), a St. Kitts and Nevis Independence Honours Award for his contributions to Education and Public Service (1988), and a Companion of the Most Distinguished Order of St. Michael and St. George (CMG) conferred by Her Majesty Queen Elizabeth II (2005).

On behalf of the Government and people of St. Kitts and Nevis, Prime Minister Harris extends deepest sympathy to his daughter, Adrienne, and his son, Douglas, as well as his sisters, Dora Stevens and Myrtle Heath who both live in Antigua, and his cousin, Sylvia Manning.

Mr. Harper was pre-deceased by his wife, Dr. Barbara Lyle-Harper, a Jamaican who worked as a District Doctor and Medical Superintendent at the Alexandra Hospital in Nevis from 1963 to 1966.