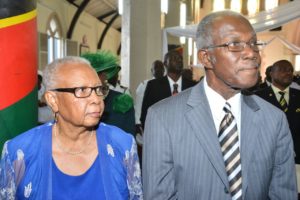 Prime Minister Dr. the Honourable Timothy Harris and Honourable Senator Akilah Byron-Nisbett visited the family of the late Sir Probyn Inniss, MBE today, Sunday, March 12th, 2017, to pay their respects on behalf of the Government and people of St. Kitts and Nevis. 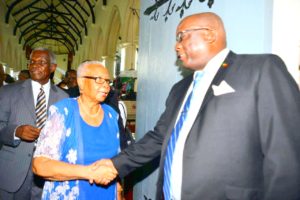 “I extend my heartfelt condolences to Lady Rosamund Inniss, the wife for some 55 years of His Excellency Sir Probyn Inniss, MBE, and to their three children, Mrs. Angela Inniss-Hodge, Ms. Marcia Inniss and Probyn E. Inniss, Jr., their grandchildren and other family members,” Prime Minister Harris said today.

“The Government and people of the Federation of St. Kitts and Nevis join with them to mourn the tremendous loss of Sir Probyn Inniss whose thumbprint will forever be on the annals of history,” the Honourable Prime Minister added.