Health conscious walk enthusiasts, who every last or first Saturday of the month join Prime Minister Harris, as he fights the scourge of NCDs among the public through practical ways, had defied the early morning darkness and by 5:00 am had assembled at the bus stop in Saddlers, ready to take off towards St. Paul’s. Dr Harris is also the National Political Leader of the PLP.

The walk had been organised by Mr Kevin ‘Ninky’ Williams, the PLP Branch Chairman of Constituency Number Six, who walked right behind the Prime Minister all the way. He later ensured that there was more than enough food in the form of a healthy breakfast for the walkers who had turned up from all the corners of the island. 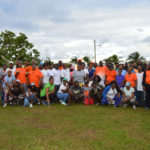 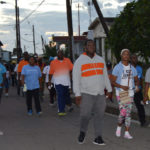 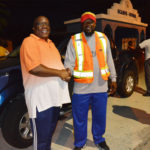 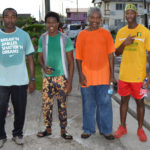 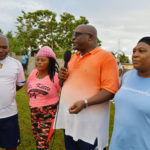 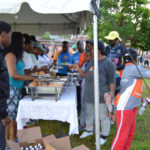 After a word of prayer said by the Peoples Labour Party Women’s Arm Representative and PLP’s Prayer Warrior Mrs Sonia Henry, the energised walkers that also included the PLP’s Deputy Political Leader Senator the Hon Akilah Byron-Nisbett walked towards Lavington in near semi-darkness as it was not until when they got to Parsons that good light came out.

Leading most of the way was regular walker Rastaman Mr Clifford Davies. However by the time they got to the finish point, Rastaman had been beaten to the third place. Getting to the National Bank ATM in St. Paul’s in first position was Mr Vibert Whattley followed by Mr Milano Welcome. In the fourth place was Mr Damien John.

“I want thank the organisers of this health walk for the splendid show we had this morning,” said PLP’s National Political Leader Dr Harris. “It is not easy to get people up early but they showed dedication and commitment to this exercise in wellness. I want thank all the members of the Executive and all the branch leaders for mobilising a tremendous turnout on this another of our health walks.”

He singled out for special mention and congratulated Mr Kevin ‘Ninky’ Williams for having mobilised so many people to come out and take part in the walk and also for ensuring that at the end of the walk they all had a healthy breakfast.

Others that were recognised and thanked by the Prime Minister included Mrs Gloria Fraser of Constituency Number Four who has not only been taking part in the walks but also bringing others with her, and all the others from Number Four.

Mr Glenville Mills and Ms Marsha Lewis who were present and took part in the walk were also thanked for making arrangements for a church service that was going to be held the following day in Sandy Point.

Ms Lewis said that she had been participating in many walks, but concluded that this one had drawn the largest participation. “I want to give Constituency Number Six a round of applause and to Mr Ninky Williams for putting a big effort in this health walk, in conformity with what the Prime Minister says that ‘a health nation is a wealthy nation’.”

Chairman of the PLP Branch Constituency Number Six, Mr Kevin ‘Ninky’ Williams, thanked all those who turned out for the health walk in his constituency adding that it was quite encouraging to see such numbers.