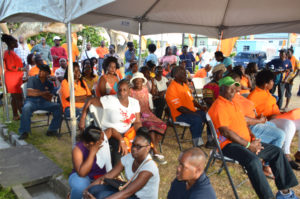 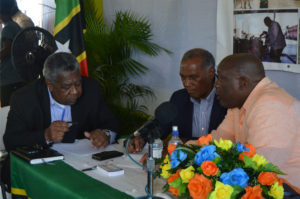 BASSETERRE, ST. KITTS, May 25, 2018 (PLP PR Media Inc.) — Prime Minister and Minister of Finance, Dr the Hon Timothy Harris, has called on the recently instituted Pension Committee to ensure that implementation of the Defined Contribution Pension Programme for some 1,200 Government Auxiliary Employees is done this year.

Prime Minister Harris, who was addressing the Prime Minister’s Open Forum on Sunday May 20 at the Edgar T. Morris Primary School in Tabernacle, recalled that the former Dr Douglas-led Government had in 2007 promised the then Non Established Workers that they would be made civil servants and begin to get pensions and gratuities. It never happened and it led to them losing the honorarium they would have had each December since 2012.

The Team Unity Government last year set up and organised a special Pension Committee that would look into ways of implementing a Defined Contribution Pension Programme, where both the employer and the employee would pay towards the employees’ pension.

Prime Minister Harris, who was widely cheered when he made the announcement, observed that the committee is headed by Mrs Torfrida Rochester, the Chief Personnel Officer, and has among its members Mr Levi Bradshaw, the Accountant General, Ms Shermel James, the acting Labour officer, Mr Calvin Edwards, the Budget Director, and a representative of the Legal Department.

“We took Mr Glenroy Woodley an auxiliary employee himself, a young man with an independent mind who will call in on every programme to say what he thinks is right and say what he thinks is wrong, on the committee along with a representative from Nevis, so that this year the non-established workers will be sorted out by the Team Unity Administration,” said Dr Harris.

The Prime Minister told the supercharged attendees at the Open Forum that the Financial Secretary has been told that they better hurry because if the pension scheme is not implemented in time, Government will have to pay the Auxiliary Employees their two per cent and holiday pay which were taken away by the previous administration. Dr Harris warned: “We will restore it for the people if the officials do not get it right very quickly.”

The Prime Minister’s Open Forum which is part of Team Unity’s Good Governance and Prosperity Agenda, was chaired by Attorney General the Hon Vincent Byron, and was also addressed by Senior Minister the Hon Vance Amory who holds the Labour portfolio.

Also addressing the Open Forum was Minister for Public Infrastructure the Hon Ian Patches Liburd. In attendance included Minister of State for Health the Hon Wendy Phipps, Cabinet Secretary Mrs Josephine Huggins, Deputy Speaker Senator the Hon Akilah Byron-Nisbett, and PS in the Office of the Prime Minister Mr Andrew Skerritt, among others.