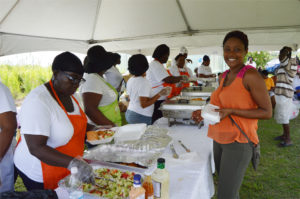 BASSETERRE, ST. KITTS, July 27, 2017 (PLP PR Media Inc.) — Putting people first is the Peoples Labour Party’s (PLP) guiding principle and the forthcoming school-drive fundraising breakfast to be put on by the Women’s Arm of the PLP on Saturday August 5, will be one of the ways the party gives back to the community. It’s hoped that this will be one of the best school fundraisers thrown by the political party.

The Peoples Labour Party, whose Political Leader is Dr the Hon Timothy Harris who is also the Prime Minister of the Federation of St. Kitts and Nevis, is one of the three parties making the ruling Team Unity Administration. 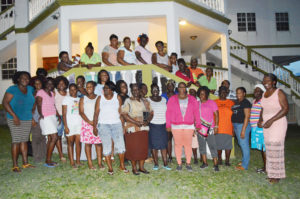 According to Ms Tishanna Norford who is one of the two Women’s Arm Representatives on the Peoples Labour Party National Executive, “The purpose of the breakfast that we are going to be having next week Saturday August 5 is to raise funds.”

She noted: “It is a national fundraising event that is being spearheaded by the Women’s Arm of the Peoples Labour Party (PLP) and is one of the activities that we have as it relates to giving back to the community. The women of the PLP are uniting and it is going to be a national effort, all the constituencies will come together and donate different items for the said breakfast.”

The menu will be geared towards the traditional palate. There will be a little of everything according to Ms Norford, but she mentioned bush tea, coffee, salt fish, bacon, eggs, Johnny cake, bacon, mackerel, dumplings, green bananas, green salad and fruit salad as well. There will also be goat water and souse available as the event will be going up to 12:00 noonwhere some will need more than a breakfast.

“This is the first national breakfast for the year, spearheaded by the Women’s Arm of the Peoples Labour Party,” said Ms Norford. “You can always look forward to more fundraising initiatives, and finding different ways that we can give back within the communities and supporting women particularly those with greatest responsibilities such as single parents.” By visiting different fundraising websites for inspiration, the idea of the breakfast was found to be a popular one, so who knows what will be done next to raise money for those who need it most!

The group of dedicated women from all the constituencies will be conducting what Ms Norford called a school drive which they will be doing in a couple of weeks. During the drive, they will be giving out schools supplies, exercise books, stationery, and school bags for the school children as they prepare for the new 2017/2018 academic year.

“There are people on the ground in each community that we will be able to identify because we are already aware of some of the people in Constituencies Number One, Two and Three who would greatly benefit from our support. We also want to reach out to more persons in need of this support,” pointed out Ms Tishanna Norford.

While the forthcoming breakfast is a national event, at the branch level members of the Peoples Labour Party (PLP) Branch #7 Women Empowerment Group set the ball rolling when they held a fundraiser breakfast on Saturday June 3, to raise funds to help those parents who could do with an extra supporting hand in the constituency who had children graduating from primary schools and moving on to high schools.

Following their pledge, members of the Peoples Labour Party (PLP) Branch #7 Women Empowerment Group made sure that all those parents needing additional support and who had children graduating from the four primary schools in the constituency were well catered for, and gave them support by attending all the graduation ceremonies.