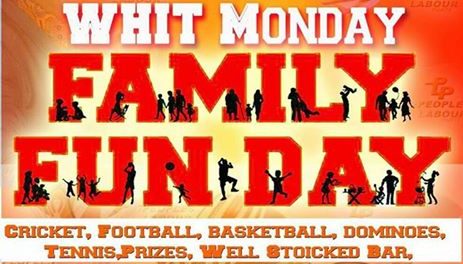 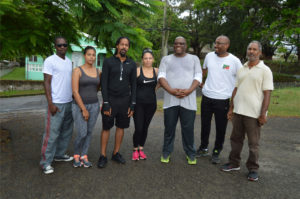 Some of the people from Constituency Number Two who took part in the last Health Walk pose for a picture with Prime Minister Dr the Hon Timothy Harris at the end of the walk. From left are Mr Leroy Henry, Ms Solaine Ayobe, Mr Nubian Greaux, Mrs Lucy Greaux, Prime Minister Harris, Chairman of the PLP Mr Warren Thompson, and Mr Alfredo Rodriguez.

BASSETERRE, ST. KITTS, May 31, 2017 (PLP PR Media Inc.) — Communities in Central Basseterre (Constituency #2) will on Monday June 5 (Whit Monday) have the opportunity to revisit the grandeur of past days courtesy of Peoples Labour Party (PLP) No #2 Branch when it holds a sporting fun day at the Gardens Playground.

It has been more than ten years since communities in Central Basseterre observed that family get together, and according to PLP’s Number Two Branch Chairman Mr Nubian Greaux, who is also the President of the Gardens Hotspurs Football Club, they intend to start building bridges that would connect “us to the youths and youths with us.”

According to Mr Greaux, from the football aspect of it, they hold activities on Whit Monday but their intention this year is to revive that aspect of the family sporting fun day by incorporating other sporting disciplines that will help to bring together people of all ages. 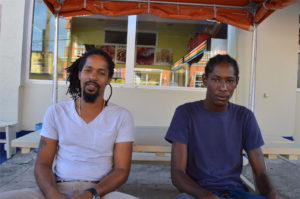 “It used to be held every Whit Monday and it involved people from Constituency Number Two entirely,” said Mr Greaux. “I do not know why it died, but I guess there was some sort of committee in place and it just fell apart, and it just ceased to happen annually.

“On an annual basis we do just football alone and so what we would like to do this year is to broaden the scope of activities to include cricket, basketball, dominos and draughts for that particular Whit Monday fun day of activities.”

To make the day a success, the PLP #2 Branch Chairman is being assisted by Mr Diovonne Richards who is the person in charge for the youth, and members Mr Leroy Henry, Mr Isaiah Newman, Mr Christophe Greaux who is also PLP’s Deputy National Secretary, Ms Jackie Dyer and Mr Urban ‘Massive’ Penny.

“At this point in time we are doing most of the ground work as the PLP #2 Branch, but once we are through we will officially invite the representative of our Unity Movement partner Mr Jonel Powell of the People’s Action Movement (PAM),” observed Mr Greaux. “The event is for all the families and we expect to see a massive turnout.”

Invitations are out for people from as young as five years to those who are over 50-something years old, males and females, players and non-players. He noted that this arrangement would make it possible for a wider age group to participate in what promise to be a fun packed day for all of the family.

“There will be a DJ, well stocked bar, and food and drinks will be served,” announced Mr Greaux. “It is just for all to come out and have fun, bring back the community together and start making and building the bridges to get back the youths and the community involved with raising our kids”

He added: “It is all about looking out for the wellbeing of everybody as we used to say twenty years ago, which as I can see right now, you can’t relate to back then. Right now those relationships are torn apart and these types of activities I am hoping would start to build those bridges that would start to connect us back to the youths and youths with us.”

In the meantime, Mr Nubian Greaux has thanked Prime Minister and Political Leader of the People’s Labour Party (PLP) Dr the Hon Timothy Harris for involving the communities of constituencies number Eight, Two and One in his monthly Health Walks. He described the move as a welcome one because of the health benefits people stand to gain.

“While it was unfortunate that it did not take place as planned last Saturday as the Prime Minister was away, we are looking forward to taking part in it next month and I making am appeal to people in Number Two to join the Prime Minister in this walk,” appealed Mr Greaux.

The walk whose new date will be announced later would start at the St. Peters Community Centre, proceed along the Main Road to the Shadwell Roundabout, then south towards the CFBC, then east along Cayon Street, and continuing east along Pond Road and ending at the last round about in Frigate Bay.

“Some people have said it is a long walk, but it is all downhill and before tiredness could register in your body you will have come to an end where a healthy breakfast will be on offer,” concluded Mr Greaux. “I am calling on the people of these three constituencies, numbers Eight, Two and One, to come out not only for the health benefit but for a chance to talk to your Prime Minister,”