Leader of PAM, Hon. Shawn Richards next to former Leader of the CCM, Hon. Vance Amory and Mrs. Amory
Tweet 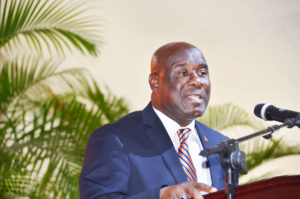 BASSETERRE, St. Kitts, March 26, 2018 (Press Unit in the Office of the Prime Minister) – The three independent political parties that came together to form the historic Team Unity movement – the People’s Labour Party (PLP), the People’s Action Movement (PAM), and the Nevis-based Concerned Citizens Movement (CCM) – have all reaffirmed their commitment to the coalition.

This latest show of unity and commitment was demonstrated on Saturday, March 26, at the People’s Labour Party’s second annual National Convention at the Patsy Allers Playing Field in West Basseterre.

During the public session of Saturday’s convention, Deputy Premier of Nevis, the Honourable Alexis Jeffers, brought fraternal greetings on behalf of the Concerned Citizens Movement.

The deputy premier added, “We in Nevis can say we have benefited tremendously as an island [under Team Unity]. We can boast of what Team Unity has brought to the people of Nevis and that is why we are here…adding our voice to this convention and making sure that when it’s all said and done we are able to keep this harmonious relationship together.”

Political Leader of the People’s Action Movement and Deputy Prime Minister of St. Kitts and Nevis, the Honourable Shawn Richards, commended the PLP, the youngest political party in the Federation, for maintaining its focus on the people.

Minister Richards also noted that it was important for him, as leader of PAM, to attend the PLP’s convention as his party recognizes “the importance of Team Unity; three different political parties working together as one to bring growth and development to the people of St. Kitts and Nevis.”

St. Kitts and Nevis’ Prime Minister, Dr. the Honourable Timothy Harris, who is the Political Leader of the People’s Labour Party, thanked the leadership of both the CCM and PAM for its commitment and dedication to the Team Unity alliance.

Dr. Harris said, “In the campaign, I pledged to do my very best for this country that I love, the country of St. Kitts and Nevis; Nevis [being] my father’s land [and] St. Kitts my mother’s land, so I am a product of unity and it blesses my heart to hear the deputy premier say what the premier before him has said that Nevis has seen its best days under a Team Unity Government and so has St. Kitts.”

“It’s forward on together as one movement; many people, different colours, but certainly one movement and each of us should strengthen the link in the chain,” Prime Minister Harris said, while noting that Team Unity is “a people-centred movement designed to bring and preserve our people’s dignity through commitment to those pillars that create a noble Nation.”