BASSETERRE, ST. KITTS, (March 22, 2017)— Peoples Labour Party’s Political Leader, Dr the Hon Timothy Harris, who is also the Prime Minister of the Federation of St. Kitts and Nevis is assuring the nation that the current drive to strengthen his party is aimed at strengthening the Team Unity Movement.

“In strengthening the Peoples Labour Party, we are strengthening the Team Unity Movement,” said the PLP Political Leader on Wednesday (March 22) during an appearance on Sugar City 90.3 FM’s ‘The People’s Voice’ show hosted by Ambassador Michael Powell. “We are making the Team Unity Movement an indomitable movement; invincible because each of its constituent parts is strong.”

The Peoples Labour Party (PLP), a member of the ruling tri-party Team Unity coalition, will be holding its inaugural National Convention on Saturday March 25 at the Recreation Grounds, in Tabernacle Village. This historic event has seen a sustained spike in the party’s membership recruitment drive.

According to the Party’s Political Leader, the three parties in the coalition that includes the People’s Action Movement (PAM) of St. Kitts, and the Nevis-based Concerned Citizens Movement (CCM) are strong in the respective areas they will be contesting in elections. 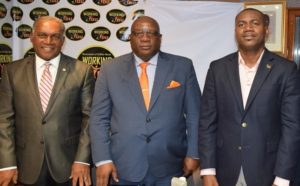 “Equally where the People’s Action Movement (PAM) contests, we will bring our supporters to their assistance adding to the synergies; adding to the probability of success as we displayed last time. We will bring those who are Labour to support the candidates wherever they are, making them victorious.”

He observed that the move by the Peoples Labour Party is an important one as when the three parties are together, they will be stronger. This was already shown when they came together before the last general elections and Team Unity emerged victorious, with Dr the Hon Timothy Harris being named Prime Minister.

The People’s Action Movement has also announced the dates for their upcoming Caucus and National Convention where the party will be seeking to elect a new executive as it strives to strengthen it’s party base and structure. The PAM Annual Convention will take place on Sunday April 23rd and the Caucus will be held two weeks prior on April 8th .

The CCM will be holding it’s Party Caucus this weekend on March 26th  where again a new executive will be elected to lead and chart the course for the Party for the upcoming years.

Prime Minister Dr. Timothy Harris who leads the Tri-Party team UNITY Government which comprises Concerned Citizens Movement (CCM), People’s Action Movement (PAM) and Peoples Labour Party (PLP) government declared  “Success came when we came together, and we will continue on that path of success,” advised the PLP Political Leader. “The message before the last election was that people wanted, and people preferred Team Unity. They have it now, and they have not built it for persons to destroy.”

He described Team Unity’s victory at the February 16, 2015 elections as their ‘labour of love’ and he made clear that the Unity Movement would not let a few dissatisfied persons to bring it down because they can’t get their way, or because they cannot turn and twist the Prime Minister. In their delusions they are hoping that with their self-destructive actions that they would bring the movement down.

“We are stronger than that,” he said. “We are more resilient than that and we will do all in our power to advance the cause of the people St. Kitts and Nevis, and we say we need the coalition of the willing.”

Meanwhile Prime Minister Harris publicly expressed appreciation and gratitude to his Cabinet colleagues for their strong support (of him) over the last two years adding that it was because of their confidence in themselves, and their confidence in the vision of Team Unity why they were able to hold a Cabinet of diversified groups together without any major incidents.

“The distractions that you are hearing certainly are not coming from within the Cabinet,” said the Prime Minister. “The country has a very stable administration and I can speak to each member of the Cabinet. They want the Team Unity arrangement to succeed, and it is succeeding, and it is delivering and so while the Cabinet holds firmly as we have been holding together over the last two years, the country will continue to be in competent hands.”

He individually thanked the leaders of the two constituent parties within the Team Unity Movement, the Hon Shawn Richards of the People’s Action Movement (PAM) on St. Kitts, and the Hon Vance Amory of the Concerned Citizens Movement (CCM) on Nevis.

“The Hon Shawn Richards who has been a person on whom I could rely, has always given me outstanding support even on difficult decisions,” noted Dr Harris. “I want to hail him, to big him up and to say that he has been a reliable friend.

“I want equally to thank the Hon Vance Amory as Leader of the Concerned Citizens Movement (CCM) party in Nevis. He has been a bulwark of support and his confidence I could rely upon and I want to say thanks to him and for the leadership of both parties for their support because this is a coming together for national good.”

According to the Federation’s Prime Minister, the decision by the three parties to come together was meant to elevate country above party, and to look at what was right for the country and to ensure that they put aside their own personal preference in support of the prosperity and the good governance agenda for St. Kitts and Nevis.

“I approach the (PLP) convention then with a lot of love, feeling inspired and feeling a sense of satisfaction that the idea that it was time for Unity, that that idea still lives on in hearts and in the minds of the majority of persons throughout St. Kitts and Nevis,” concluded the PLP Political Leader.