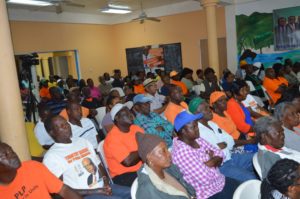 Basseterre, St. Kitts, March 07, 2018 (SKNIS): The broad impacts of the government’s housing strategy were once again highlighted by Deputy Prime Minister and Member of Parliament for the area, the Honourable Shawn Richards, during a Town Hall Meeting held at the Sandy Point Community Centre on Tuesday, March 06.

Minister Richards made specific mention of the houses being constructed in Sandy Point, noting that a lot of progress has been happening in the area.

“When you enter Sandy Point, you will see that we began building ten homes there under [National Housing Corporation] NHC and just this morning I visited those homes and I can say to you the people who have been waiting, that those homes are coming to a completion. Majority of them are already painted, some have tiles already, some of them basically finished, but there are others in the phase of completion,” he said.

The Member of Parliament appealed to the constituents to be patient, as everybody can’t receive a house all at once from just 10 homes. He did, however, confirm that more will be made available soon.

“While those ten are being completed, the manager of NHC has already said to me that she is about to begin a second phase of houses right here in Sandy Point,” Minister Richards stated, adding that other provisions are being put in place to ensure that the people of Sandy Point are afforded more homes. “… I was speaking to someone from Lands and Surveys and the individual said to me… I am working on something for Sandy Point and that something is to ensure that other lands are made available to build more houses and distribute to the residents of Sandy Point.”

The Deputy Prime Minister indicated that an area close to the Sandy Point Community Centre is currently being looked at for the further distribution of lands and additional houses. He spoke briefly of the government’s commitment of ensuring that persons own lands and/or houses, adding that “recently in Cabinet we had the approval of even more land up in the Stadium View area, again for the people of Sandy Point.

The Unity Housing Solutions Programme is a platform for NHC to supervise the construction of 300 affordable homes throughout St. Kitts for the benefit of people with small to modest incomes. These homes have bigger bedrooms and bathrooms, and carry small monthly payments, depending on household income. Under the programme, houses are also constructed for people who have land, yet need assistance to build.

The National Housing Corporation (NHC) was incorporated in 1996 after being renamed from the Central Housing Authority (CHA). NHC was created by an Act of Parliament in 1997 for the purposes of “adding and improving” the existing supply of houses and enhancing the usefulness of the funds of the Corporation by promoting greater efficiency in the housing sector.