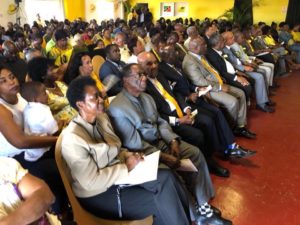 Sunday 22nd April 2018 – The People’s Action Movement (PAM) held its 53rd Annual National Convention on April 22nd, 2018 under the theme “Together We Succeed.”
Scores of people turned out to be a part of PAM’s 53rd National Convention that was held at the Party’s Headquarters on Sunday 22nd April. The audience anticipated a historic event and was sure to witness it either in person or via PAM’s social media platforms. The audience at the Convention, as well as, those who watched via social media was overwhelming.

The significance of the theme ‘Together We Succeed,’ as expressed in the presentations made by the PAM Constituency Representatives, signaled a stronger PAM, a better PAM, a committed PEOPLE. This was proven at yesterday’s powerful, exciting and vigorous Convention with all six (6) dynamic candidates embracing the historical significance of the 1965 Convention.

The candidates, Hon. Shawn Richards, Hon. Eugene Hamilton, Hon. Lindsay Grant, Hon. Ian ‘Patches’ Liburd, Ambassador Jonel Powell and Mr. Vernon Connor, addressed the concern that is being rumored that PAM is non-existent, along with other social concerns, by providing fundamental responses to the political and economic changes that have been undertaken as Ministers of government and as Constituency representatives. Congratulatory remarks were made by Prime Minister and Leader of the PLP, the Hon. Dr. Timothy Harris and Hon. Alexis Jeffers, Minister of Land & Housing et al and member of the CCM in Nevis.

PAM’s invited Keynote Speaker, Hon. Herod Stanislas, Minister of Agriculture et al in St. Lucia, delivered a remarkable speech during his presentation. Hon. Stanislas encouraged the PAM executive, candidates, delegates, well-wishers and supporters to continue to work together for continued success of the Party. “Ladies and gentlemen, your Convention theme, together we succeed, is an apt reminder that you must always keep fighting and working for the causes, principles, programs and philosophies that you believe in,” said Hon. Stanislas.

Hon. Shawn Richards, in his Address, thanked the delegates for placing their trust in him to lead the Party to another victory. Hon. Richards recognized the Founding Members of PAM, along with the new Executive, and highlighted the achievements of the PAM candidates who are in Government. He also gave words of encouragement to the PAM representatives of Constituencies 1 and 2. In his presentation he said, “The concerns of you, the people, must continue to be heard and to resonate with us as leaders of the People’s Action Movement. A strong PAM leads to a stronger Unity Coalition Government. Let it be clear, our mission is to increase the seat count from 4 to 6 by achieving success in constituencies #2 for Jonel Powell and #6 for Vernon Connor.”
Following the presentations made by the Speakers, Awards were given to 9 strong supporters of the Party for their sterling contribution made for many years. The awardees were Ms. Hazeline ‘Cutie’ Maynard, Mr. Troy Flanders, Mr. Claudius Gumbs, Mrs. Violet Browne, Mr. Melvin James, Dr. Leroy Richardson, Mrs. Wendy Grant, Mr. Valentine Lindsay and Shirley Julius.
Awards were also given to Ms. Natasha Grey, Treasurer of the PAM, and Ms. Ryllis Percival in appreciation of their hard work and dedication over the years.
Special thanks are extended to persons who made the Convention a success, all of our well wishers, supporters, members and friends, and to persons such as Infamus, the Corn & Okra String Band, Kimi-lee Knight, Shaquanda Thomas, Enid Lawrence and Valarie McIntosh for their performances.
The upcoming events on the PAM Calendar of Activities are Church Service at the Antioch Baptist Church on Sunday April 29th and PAM’s all day event at the PAM Headquarters on Monday 7th May, 2018. To get more information, like us on facebook at Pamskn, follow us on Twitter at pamskn. You may also subscribe to our YouTube channel at PAM SKN OFFICIAL.