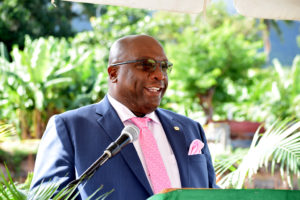 BASSETERRE, ST. KITTS, JANUARY 19TH, 2018 (PRESS SEC) — Prime Minister Dr. the Honourable Timothy Harris, speaking on Thursday, January 18th, 2018 at the ground blessing ceremony for the new health centre being built in the village of Tabernacle, said the facility signals “what we in Team Unity stand for – people first and health above all because health is a blessing from God, which we should never take for granted.”

The Prime Minister of St. Kitts and Nevis added, “This facility, in my view, will be put to good use by all of the people in this country and, in particular, the zone [Tabernacle on to Belle Vue], which this facility should serve.  By all of the people, I mean our children at the day care centre right here in Tabernacle, our children from our primary schools…all for whom this facility is intended to serve and to serve very well.”

Prime Minister Harris, who is the Constituency Representative for St. Christopher #7, went on to note that, “This facility will not only serve the young children, immunizing them from diseases, attending to their cuts and bruises, their asthma and other ailments, but this facility is also to serve our teachers, some of whom are here, [as well as] the lawyers, the doctors, the politicians, the Prime Minister, the Ministers, the police, the pregnant women, our elderly, our sportsmen and sportswomen, the poets, the unemployed, and gainfully employed.  This facility is for all the people from wherever they may come.”

Ida Duinkerk (née Ida Mercer), a 69-year-old Tabernacle resident, who went to the ground blessing ceremony with her husband, sat in a wheelchair on Thursday morning as she expressed excitement over the new health centre, which started being built on November 19th, 2017.  Mrs. Duinkerk told the Press Unit in the Office of the Prime Minister that she intends to go to the new health centre for her exercises when it opens. 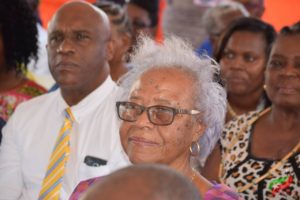 Susanna Lee of Tabernacle, who resides in Stone Castle, also attended Thursday morning’s ceremony.  Ms. Lee’s illustrious 40-year-plus career in education – of which 26 years were spent serving as a principal – has been memorialized with the Susanna Lee High School Scholarship award administered by the Social Security Board.  During the ground blessing ceremony, she beamed, thinking about the many generations of children who would benefit from the opening of the health centre.

Ms. Lee told the Press Unit in the Office of the Prime Minister that, “We really needed a very good health facility in Tabernacle, so I am glad that my Prime Minister and his Cabinet are bringing it to fruition.  I am extremely proud because I know it is going to serve our community well.  The people in the community are going to appreciate this, I can tell you, and it is going to be well used.”

Several years ago under the previous administration, the Tabernacle Health Centre – facing extensive termite infestation and a crumbling physical and septic infrastructure – was relegated to the basement of the nearby day care centre, where it remains to this day.

The new health centre is being constructed on the demolished site, which has undergone extensive subterranean soil treatment to kill the termites under it.  William Challenger of Tabernacle, who is the proprietor of William & Son, won the competitive bid to construct the health centre in his community.

“They congratulate me and say they appreciate it, to see where I come from and where I am now,” Mr. Challenger said about his fellow community members while speaking with the Press Unit in the Office of the Prime Minister after Thursday’s ground blessing ceremony.

“When I say where I come from, as a small contractor for the past 25 years, I’ve never been in the spotlight.  So because I won the bid, everybody knows me now,” he said adding, “This is the big break.”

The Government of the Republic of China (Taiwan) contributed US$1 million dollars toward the construction of the Tabernacle Health Centre.