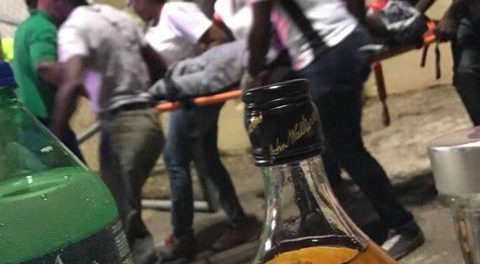 During an exciting qualifying premier League football match between defending SKNFA Champions Cayon and Village Superstars hundreds of spectators were sent scampering after hearing what sounded like gun shots coming from the Eastern corner of the Warner Park Football Grounds.

Reports immediately began circulating that there was a shootout at the game and that one fan was dead. However Police have indicated that an air pistol/ or pellet gun was used in the incident and two individuals are in custody assisting the investigation. This is a terrible shame as pellet guns are usually used for recreational purposes for things like shooting practice and scenario training, with places like Teddy Tactical giving a good insight into the best air guns to buy. It’s a shock to see therefore that these guns have been used by people to cause arm to another individual(s).

The wounded man, who has been hospitalized, is Amal White, also known as soldier, who has worked with Operation Future.

He told WINN FM that he was shot in the hand and the waist by the pellet gun , and fell, hurting his leg.

One prominent citizen has expressed concern that the lives of people trying to enjoy a sporting event are being put at risk by what he speculated was gang-related shootings.

As a result of the incident the game was called off.