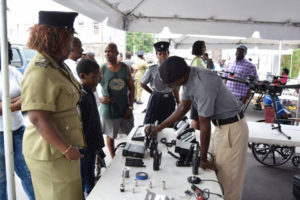 Residents interacting with members of the RSCNPF during Police Career Fair

BASSETERRE, St. Kitts, November 27, 2017 (Press Unit in the Office of the Prime Minister) – Prime Minister and Minister of National Security, Dr. the Honourable Timothy Harris, has reiterated his call for every citizen and resident in the Federation to partner with the Royal St. Christopher and Nevis Police Force as it continues to carry out its mandate of building safer communities.

The honourable prime minister said, “Building safer communities relies on the partnership and the support of each and every person in the Federation.”

Prime Minister Harris made this disclosure during a ceremony on Saturday, November 27, 2017, at Government House where a number of officers were recognized and awarded for their longstanding and dedicated service to the nation.

Dr. Harris also used that occasion to declare Police Week 2017 officially open. Police Week, which runs from Saturday, November 25 – Saturday, December 2, is being observed under the theme, “The Police and The Public Working Together for Safer Communities.”

Dr. Harris stated, “We have been able to capitalize on the support of several important and valued partners, including for example the Embassy of the Republic of China (Taiwan), and I want to single out and thank [His Excellency] Ambassador George Chiou for the support of his country.”

The Government of the Republic of China (Taiwan) has made a substantial financial contribution towards the Cities and Roadways Surveillance System CCTV Project – Phase One. On Friday, December 2, 2016, the Taiwanese Government made an initial investment of EC$5 million to facilitate the installation of cameras in the Basseterre, Frigate Bay, and surrounding environs. This was followed up with a further injection of close to US$70 thousand on Friday, November 24, 2017.

Prime Minister Harris continued, “We have also had to rely upon the increased budgetary support from the Federal Treasury, and we have over the last two plus years invested much in needed assets in the security forces – forensics, vehicles, CCTV, international training and organizational development. Truth be told, never before in the history of our Federation, at least post Independence, have so much been invested in our police in so comprehensive a manner. The largest budget ever presented to National Security was in 2016, and in our 2017 Budget we outdid ourselves.”

The Team Unity Administration assigned approximately $72 million to the Ministry of National Security in 2017. That figure represents an almost five-fold increase over the $15.3 million allocated to it in 2014. The $72 million is also exactly double the combined total amount ($36 million) disbursed in 2014 ($15.3 million) and 2015 ($20.7 million).

Dr. Harris also praised the police force for the strenuous efforts it is making to provide the peace dividend on this significant investment, adding: “You have been more proactive in your engagement with the people that you serve. You have taken community-policing more seriously and have had a visible presence in our communities.”