Addressing Prime Minister Dr. the Honourable Timothy Harris and Minister of Tourism the Honourable Lindsay Grant, who both sat at the head table, Mr. Asaria continued, “We’re here to work hand in hand with your Government and the people of St. Kitts and Nevis to ensure that that opportunity is maximized, and I believe a lot of local vendors and supply chains have seen Mr. Flor [van der Vaart, the new general manager of the hotel] and his team interact with them, and we will do everything in our power to ensure that the economic impact of this is far and wide.”

The management of Park Hyatt St. Kitts Christophe Harbour will source goods and services of local providers to enhance and maintain the resort’s amenities.

Its amenities include three signature restaurants that offer exceptional local and international cuisine; a rum bar; herb garden, indoor and outdoor event spaces, and two pools. All of the 134 rooms and suites also incorporate local materials to create a chic, Kittitian-inspired décor.

At yesterday’s press conference, Prime Minister Harris said that the Park Hyatt St. Kitts Christophe Harbour has already had a significant impact on the economy, as reflected in data from the Social Security Board. 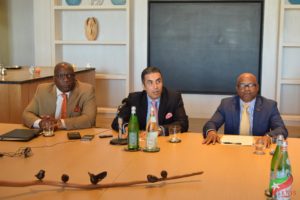 Construction began in February 2014, at which time Kier Construction, the builder of the Park Hyatt St. Kitts, had a monthly average of 40 employees, peaking at 77 employees by the end of that year with monthly wages peaking at $573,050. In 2014, its wages totaled $4.06 million.

The number of Kier Construction employees more than doubled to 183 and $8.96 million in wages were paid in 2015, the first year of the Team Unity administration.
Between 2014 and 2017, the construction of the Park Hyatt pumped $74.67 million in wages into the economy.

Range Developments has also contributed financially to the hospitality faculty of the Clarence Fitzroy Bryant College (CFBC), including sponsoring the installation of Wi-Fi and providing scholarships to train culinary students in the United States.

At a ceremony held late last year to launch the Park Hyatt St. Kitts Hospitality Training Program in partnership with the Clarence Fitzroy Bryant College, Mohammed Asaria said, “We will provide students with the know-how.”

The vice chairman of Range Developments, the developer of the Park Hyatt St. Kitts, added, “We would have failed in our collective responsibility if we are not staffed with Kittitians and Nevisians in senior management positions over the next few years.”