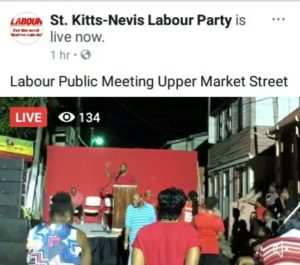 Basseterre, St.Kitts (May 6th, 2018):-The St.Kitts Opposition Labour Party are showing definite signs disorganization, disarray and continually waning appeal and popularity. The Dr. Denzil Douglas led are i=currently in their signature event period, the lead-up to the Annual Labour Day March. As per usual the 85 plus year old Political Organisation organized a series of Public Meetings to drum-up support for their signatare Labour Day March Event on Monday May 7th. However the public meetings have turned out to be huge disasters as none were able to draw more than 50 persons. The party held meetings on Market Street on Sunday April 30th and followed on Thursday May 2nd with a Public Meeting in Monkey Hill.  According to estimates both meetings drew less than 50 persons. This is unsual for a party that can boast of being able to mobilise hundreds in minutes even at their lowest eb.

Party loyalist have taken to social media to try and explain the poor turnouts and what seems to be a waning appeal and popularity in the Dr Douglas led Opposition Party. The Loyalists have blamed alleged threats of victimization by the government. An allegation that has been stringly denied and has been dismissed by most as political propaganda. However even with that argument the obvious question is then if the Public Sector employees are afraid to attend the Public Meetings then what about those in the Private Sector? The recent Row related to the Party leaders acquisition of a Dominica Passport along with their continuing tribalistic approach to opposition politics has negatively impacted the appeal of the party. The 2015 elections should’ve been a wake up call for the Labour Party to change their style and approach to politics. However this style and approach has not changed and has seemingly added to the further demise of a once proud and powerful party. The massive exodus of longtime SKN Labour Party Loyalists to the Dr. Timothy Harris led People’s LABOUR Party has been described as nothing short of phenomenal with many persons openly switching their allegiance from the Oppositon SKN Labour Party to the People’s Labour Party a member of the Team UNITY Tri-party administration.