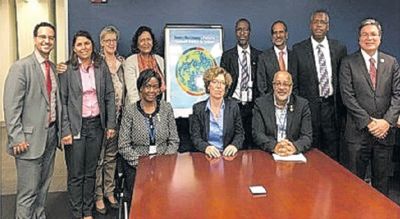 CASTRIES, St. Lucia, – The Organisation of Eastern Caribbean States (OECS) says the commitment to sustainable growth and resilience of the Caribbean’s blue economy has been strengthened with the signing of a US$6.3 million grant agreement for the Caribbean Regional Oceanscape Project (CROP).
The signing in the United States follows negotiations in July, and approval of the project by the World Bank in September, officially becoming effective a month later.
Specifically, CROP will support the implementation of regional policies, including mapping ocean assets, developing coastal and marine spatial plans and national ocean policies and strategies through active citizen engagement.
It is also intended to provide collaboration with private sector technology companies and education platforms to advance ocean education and improve OECS ocean data coverage and access through collaborative public-private platforms.
This support will allow countries to better manage natural infrastructure which is the first line of defense against storm surges and damage from rising frequency of extreme weather events, such as the recent hurricanes.
The Caribbean Regional Oceanscape Project is funded by the Global Environmental Facility (GEF), administered by the World Bank, and will be implemented by the St. Lucia-based OECS Commission.
The participating countries are Dominica, Grenada, Saint Kitts and Nevis, St. Lucia and St. Vincent and the Grenadines.
An OECS statement the agreement will support Eastern Caribbean countries to preserve and strengthen resilience of coastal and marine resources, and implement regional policies to stimulate blue growth. (CMC)