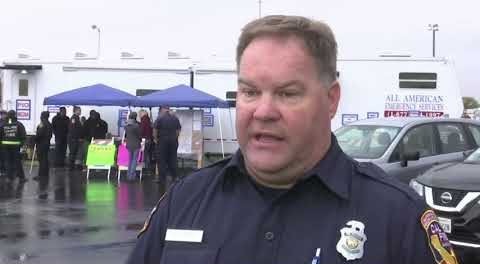 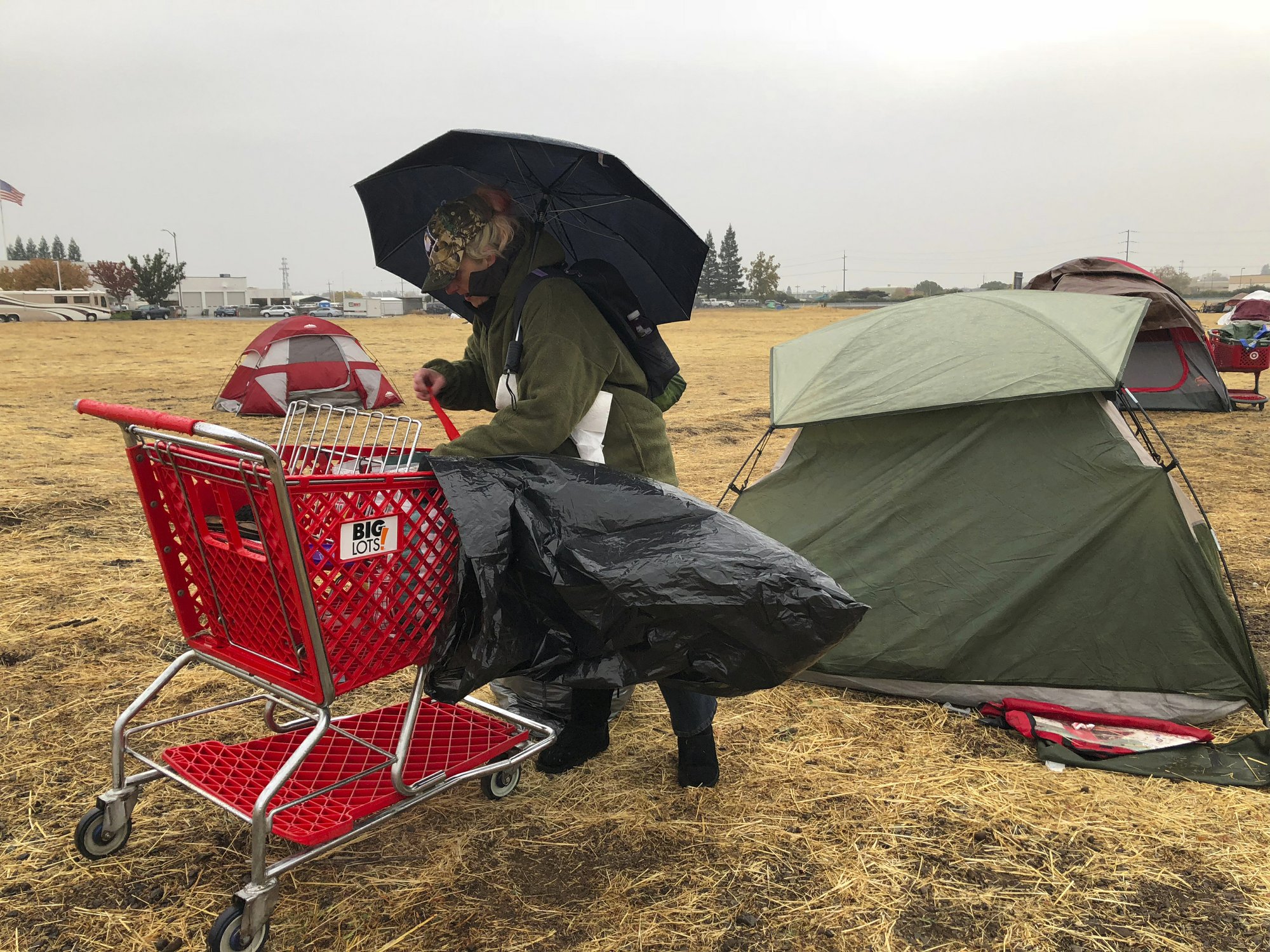 Amy Sheppard packs up items outside her tent in a Walmart parking lot in Chico, Calif., that’s been a makeshift campground for people displaced by wildfire, Wednesday morning, Nov. 21, 2018. Sheppard lost her home in Magalia to the Camp fire. She was staying in the tent for four days with her sister and 1-year-old niece. They are moving to a motel because of rain that began Wednesday. (AP Photo/Kathleen Ronayne)

CHICO, Calif. (AP) – Amy Sheppard packs her belongings into a plastic garbage bag as rain drips around her, readying to move on from a field by a Walmart where thousands of evacuees had taken refuge from a deadly Northern California wildfire.

Sheppard, 38, her sister and niece, who is 1, are looking to move into a dry hotel after camping in the field for four days. They lost their home in Magalia and the jewelry-maker tears up as she thinks about what’s next.

“This rain is making it so hard,” she said.

Rain falling Wednesday in some areas of Northern California could help crews fighting a deadly wildfire. But it could also raise the risk of flash floods, complicate efforts to recover remains and make life even more difficult for people like Sheppard who have nowhere to go.

Heavier rain is expected later in the day in the Paradise burn area, which is about 140 miles (225 kilometers) north of San Francisco, where the Camp Fire has killed at least 83 people, including two victims who were found Wednesday in burned homes. The blaze also destroyed more than 13,000 homes. While many people are determined to rebuild, others will be forced to move to new homes. Hopefully, survivors will be able to find new accommodation within the state, perhaps buying some of these San Clemente Homes, for example, but demand is expected to be high.

“The rain is really a double-edged sword for this fire,” said Rick Carhart, a spokesman with the California Department of Forestry and Fire Protection. He said searchers have “been able to sift through this really fine ash and when rain gets onto that really fine ash, it turns it into sort of a muddy muck and makes it a lot more difficult.”

Rain falling Wednesday in some areas of Northern California could aid crews fighting a deadly wildfire while raising the risk of flash floods and complicating efforts to recover the remains of those killed. (Nov. 21)

Farther south, residents of communities charred by a Los Angeles-area fire stacked sandbags as they prepared for possible downpours that threaten to unleash runoff from hillsides left barren by flames. Fire and flood cleaning services may find themselves in high demand in the coming days. Homes will undoubtedly be devastated by this turn of events, so it is important that residents help each other out as much as possible as homes will need to be renovated/remodeled. Professionals like a Plumber, electrician, builder, etc. will also be essential during this time to make sure that the homes are structurally sound and functioning to keep families secure.

Residents were mindful of a disaster that struck less than a year ago when a downpour on a fresh burn scar sent home-smashing debris flows through Montecito, killing 21 people and leaving two missing.

The 151-square-mile (391-square-kilometer) Woolsey Fire in the Los Angeles area was almost entirely contained after three people were killed and more than 1,600 structures destroyed.

In Northern California, the wildfire that started two weeks ago has torched an area in Butte County about the size of Chicago – nearly 240 square miles (622 square kilometers) – and was 85 percent contained.

A spokesman for the Governor’s Office of Emergency Services says state officials will start removing hazardous waste from the burn area “beginning next week.”

“This will take several months,” Eric Lamoureux said. “That ash is still toxic.”

Some residents may find t.Fire and flood cleaning services can often be paired together and are likely covered by insurance

“I wanted to let you know how much I appreciate all the work that you do,” he told firefighters during a brief speech.

The 71-year-old actor also slammed President Donald Trump for blaming the wildfire on poor forest management. He told firefighters, “you are tough to not only fight the fires, but you are tough to listen to all this crap.”

Officials said 563 people were still unaccounted for. A spokeswoman for ANDE, the company doing rapid DNA tests on remains, said Wednesday the family members of missing people who live outside the state can give a DNA swab at their local sheriff’s office to be sent to California.

The National Weather Service issued a flash flood watch for Paradise and nearby communities and for those areas charred by wildfires earlier this year in Lake, Shasta, Trinity and Mendocino counties.

Butte County officials said all students will be able to return to school on Dec. 3.