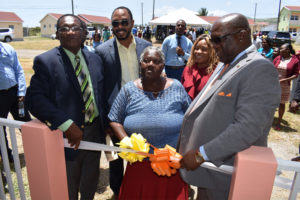 BASSETERRE, ST. KITTS, August 29, 2018 (PLP PR Media Inc.) — When in a few days’ time the Federation of St. Kitts and Nevis celebrates its 35 Anniversary of Independence on September 19, one citizen will on the very same day also be celebrating an anniversary (birthday) as she has always done. However this year’s birthday will be extraordinarily special for Ms Lydia ‘Dumpling’ Manners.

At the latest key presentation ceremony by the National Housing Corporation in its ambitious Unity Housing Solution Programme held on Tuesday August 28 at Pine Gardens in Central Basseterre, eleven individuals received keys to townhouses while another five received keys to houses built on their own land.

Ms Lydia ‘Dumpling’ Manners was one of the proud recipients of keys to a townhouse in Pine Gardens. She is profusely thanking Prime Minister Dr the Hon Timothy Harris and his Team Unity Government for making her dream of owning a house before she attains age 62 a reality. 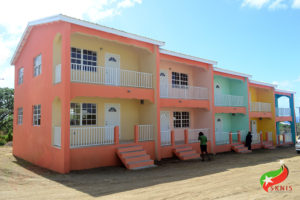 “I want to thank Prime Minister Harris, Ambassador Jonel Powell and Mrs Elreter Simpson Browne (NHC’s General Manager),” said Ms Manners. “When they first tell me about it, I was surprised I could not believe that me Dumpling will own a home. And this morning it was a surprise to me that I thank God to see me get a house before I reach 62 next month the 19 of September, and I thank the Lord and thank all of you to see me get a house.”

According to Ms Manners, she was treated well when she went to the National Housing Corporation signalling her intention to be a homeowner. The General Manager, Mrs Elreter Simpson-Browne, told her that when the houses will be ready she would ensure that she (Dumpling) would get one.

“And I get one today the 28th of August and I thank God,” stated Ms Manners. “I thank all of you who are working with the Unity Government. My heart is full with joy.”