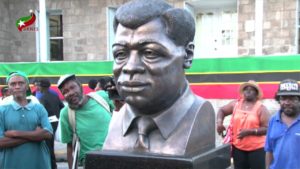 CHARLESTOWN (April 20, 2017) The junction of Main Street, Charlestown, facing the Port Terminal, is now home to a monument erected in memory of the Right Excellent Dr. Sir Simeon Daniel. A ceremony for its unveiling was conducted on site on April 20, 2017.

The late Dr. Simeon Daniel, was a political stalwart of Nevis. He was a founding member of the Nevis Reformation Party (NRP), which won two seats in Nevis during the General Election of 1980 after which he formed a coalition government with the People’s Action Movement (PAM). In the local NIA elections of 1983 his party won its first election resulting in him becoming the first Premier of Nevis.

In his construction of the Clause in the Constitution that allows for independence for Nevis, he proved himself a historical architect. This, in conjunction with his tirelessness in going beyond politics in order to offer ‘appropriate representation’ needed by his country merited him the honour of being the country’s first National Hero.

Prime Minister of St. Christopher and Nevis, Dr. Hon. Timothy Harris, in his address during the ceremonial event was led to say “National heroes by their very designation, do not belong exclusively to family, they do not belong to the party, they belong to the country and it is their values and their service that we offer up to the rest of the country”.

Continuing in the same vein, the Prime Minister applauded the outstanding contributions made by the late Dr. Simeon Daniel to his country and admits this as a source for his solidarity and support.

Dr. Timothy Harris also expressed his gratitude to all those who have contributed to the memory of our National Hero including the donor of the monument (bust) Mr. Michael Heinritz “who saw it as a fitting way to ‘memorialize’ his contribution”.

Meanwhile Premier of Nevis, Hon Vance Amory, reiterated the importance of nationals recognizing those who have contributed to the country. He spoke of the late Dr. Simeon Daniel’s strong determination evidenced by his accomplishments, despite being faced with many obstacles.  The Premier conceded that the monument is a record for posterity when he stated, “We are here to unveil this bust and it is a testament to the commitment, determination and courage which Sir Simeon possess and which he was not afraid to exhibit. It also give us a chance and opportunity to record for his memory…for posterity”.