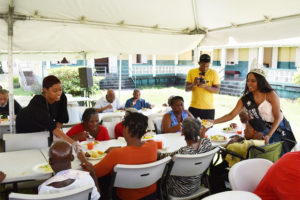 BASSETERRE, ST. KITTS, October 29, 2018 (PLP PR Media Inc.) — Reigning National Carnival Queen, Ms Sheniqua Lanns, on Sunday October 28 gave back to her community in a very special way by honouring the elderly as part of the wider celebrations and observance of October as the Month of Older Persons.

Residents of the Cardin Home for the Elderly in West Basseterre could not hide their joy as they sat under a tent on the lawns of the home to enjoy a sumptuous meal that was offered to them by Ms Lanns who is herself a resident of West Basseterre.

“I am the reigning Carnival Queen 2017/2018,” she introduced herself to some of the residents who might not have known who she was. “I am honoured to be with you guys here this afternoon in honour of the Month of Older Persons. I wanted to have this luncheon for you guys so that I can give back to you.”

Ms Lanns was accompanied by her adopted mother Ms Venelma Hanley, Deputy Speaker of the National Assembly Senator the Hon Akilah Byron-Nisbett, and Mr Noah Mills, chairman of Carnival for St. Kitts and Nevis. Before the lunch was served by staff at the Cardin Home and volunteers, Ms Hanley offered a prayer to bless the food.

In congratulating Ms Lanns, Mr Noah Mills observed that apart from representing, not only the Carnival Committee, the Ministry, the Government and by extension the entire Federation the ambassadors – queens and kings – are expected to perform specific community duties as it relates to giving back.

“They are not only to be beautiful and glamorous, but they are supposed to go back into the community and help not only the little ones but also the elders,” stated Mr Mills. “It is a pleasure for the Carnival Committee and Ministry to partner with her. It was her initiative, and when she contacted us we immediately said yes we will be a part of it. I thank you for having such foresight and I congratulate you on what you have achieved thus far and hopefully whatever you are going to achieve in the very near future.”

Ms Lanns noted that the National Carnival Committee assisted by renting the tents, tables and chairs that were used during the luncheon. She thanked all the persons who assisted in making the ceremony the success it was, saying she will eternally be grateful to them. Drum specialist Mr Royd Phipps did a drumming rendition.

In the meantime, Deputy Speaker of the National Assembly Senator the Hon Akilah Byron-Nisbett who assisted in the actual serving of the food to the residents at the home said she there to support Ms Sheniqua Lanns.

“When she contacted me and told me of what she was trying to accomplish, with the luncheon here today, I was very happy to do my part to assist her in being able to provide you with this beautiful meal today,” said the Hon Byron-Nisbett. “I also would like to thank the Carnival Committee because I know they have supported all of her initiatives and from her platform, which is assisting the Children of Incarcerated Nationals (COINS). I know she also have some of those persons here today, sharing food with us.”