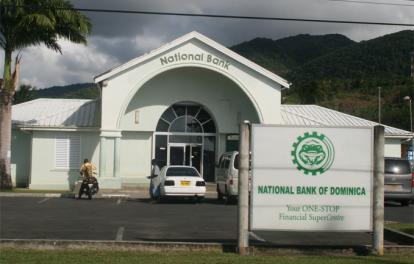 (Dominica Newsonline) For the second time in two years, the National Bank of Dominica (NBD) is recording a major loss.

The bank is expected to hold its annual general meeting on March 23, 2017 where shareholders will be given the bitter pill to swallow.

“First, we recorded impairment charges of $7.7-million to address exposure to non-performing loans and advances. Second, we incurred a loss on our externally managed investment portfolio of $10.7-million. Net income suffered accordingly, resulted in a net loss of $4.6-million,” he said.

He said that the bank has had a strong performance in its loan portfolio amidst a “still timid market”.

“On the consumer side, we prioritized mortgage vehicles and education lending and saw a marked increase in education loan in particular,” John said.

Under the bank’s operating expenses, Director’s fees increased by EC$36,736 in the year under review.

Meantime, Managing Director of the bank, Ellingworth Edwards said that in the coming year, the focus will be on “strengthening and building strategic relationships that will assist us in successfully growing our business and achieved our stated mission.”

“We will build on some of the ongoing initiatives, improve efficiencies and strengthen internal human resource capacities to deliver improved services,” Edwards said.