University of Guyana
BY TANGERINE CLARKE Eddie Grant, a Guyana-born, world-renowned, phenomenal artist, was last Saturday conferred Doctor of Letters for excellency in music by Professor Eon Harris at the University of Guyana’s first such historic distinction, during the institution’s 52nd convocation ceremony at the National Cultural Center in Georgetown.

The legendary award-winning vocalist, songwriter, producer and guitarist, in a Facebook post, was congratulated by British Band, The Equals, of which he was a founding member. 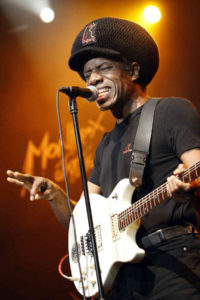 The post read, “please join The Equals in congratulating our original member, songwriter & producer and dearest friend and band brother, Eddy Grant who was bestowed with an Honorary Doctorate by Chancellor of the University of Guyana, Prof. Nigel Harris for his ‘Excellence in Music and Civic Engagement’ by the University of Guyana.

“Eddy’s rare musical genius, a master of his craft, an inspiration and talented beyond words. Without him The Equals would not exist. Thank you dear friend for your love and your continued support, you so deserve this accolade and much more. Adding, “A deserving achievement, so very proud, Luvya… Pat, Ronnie, Dzal, Decosta and Mark. Go Team Grant!” concluded the message.

Grant, who, was born in the small village of Plaisance on the East Coast of Demerara, stands among an élite group of artists as one who has not just merely moved successfully across the musical spectrum, but has actually been at the forefront of genres and even created one of his own. From pop star to reggae radical, musical entrepreneur to the inventor of “ring bang,” the artist has cut a swath through the world of music and made it his own, according to his biography.

Edmond Montague “Eddie” Grant, 70, after migrating to the United Kingdom with his family in 1960, taking up residents in the Stoke Newington area of London, fell in love with R&B, blues, and rock and expanded his musical talent to form the multiracial band The Equals, that revolutionized a mix of reggae, R&B, and rock.

With greatest hits, Electric Avenue, Gimme Hope Jo’anna, I don’t Wanna Dance, Do You Feel My Love, “I can’t Get Enough of You, and more than twenty albums recorded, Grant, who has sung to sold-out crowds across the world, has topped charts in Germany, and throughout Europe, and is known as one of the most iconic music-makers of all time.

His recent 14-track album titled “Plaisance” for his hometown, was released last year with songs including “Mind the Gap,” “Now We’re All Together,” “I’m The One.”

In a recent interview with “Visit Guyana” Magazine, the musician expressed his love of his country, stating: “Guyana is really everything, I can put Guyana against any country in the world — Guyana means a lot to me because it has given me a lot. It’s given me my mother, my father, my family, and a lot of my values. And where Guyana has gone wrong, I also have the right to say that. Just like if I go wrong somebody has the right to say, Eddy you’re wrong,”

The musical genius who owns Ring Bang Island in the Essequibo River of Guyana, built Ice Records studio in Barbados and has spent time performing and recording in the Caribbean.