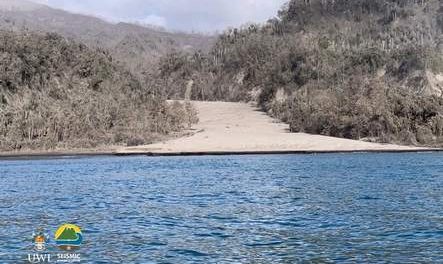 A bulletin issued by the Seismic Research Centre (SRC) of the University of the West Indies (UWI) said that the explosion occurred at 11:00 pm (local time) and that seismic activity at the volcano which erupted last Friday had changed with explosive activity earlier during the day on Tuesday.

It said prior to the explosion, long-period  earthquakes had been increasing in number.

“Categorized as a vulcanian explosion, it was accompanied by larger seismic tremor which was followed by over three hours of smaller continuous seismic tremor,” the SRC said of the earlier activity.

It said vulcanian explosions are small to moderate explosive eruptions, lasting seconds to minutes and that ash columns can be up to 20 km in height and PDCs can be generated.

“The explosions pulsed for ~30 minutes and produced PDCs that reached the sea at the mouth of the Wallibou approximately six km from the volcano. Once this tremor had died down, long-period  earthquakes were recorded, again slowly growing in numbers, but are significantly smaller than those prior to the 6:30 am explosion.”