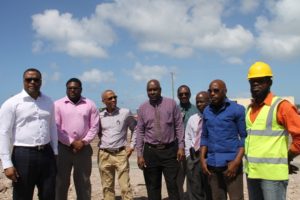 NIA CHARLESTOWN NEVIS (February 09, 2017) — Hon. Mark Brantley, Senior Minister for Sports and Minister responsible for Tourism in the Nevis Island Administration (NIA) says, an athletic track designed by Mondo experts which is under construction at Long Point, is an important project for the government.
The minister, who is also the Deputy Premier of Nevis, made the comment when he spoke to the Department of Information on February 08, 2017, moments after concluding a tour of the construction site with Cabinet colleagues and senior officials in the NIA.
“We are very, very proud of this particular project. It is the single largest investment in our youth and in sports that you’ve ever seen in the history of our little island and so for us this is a very important project,” he said.
Mr. Brantley also noted that when completed, the facility would add another dimension to the island’s tourism product.
He said it would provide an opportunity for tourism officials to market the island as a destination which also offers sports tourism.
“We hope to attract teams that might train here. We hope to attract competitions and I want the public to be assured, that what you are seeing here is going to be, at the end of the day, an International Association of Athletics Federation (IAAF)-certified service. That means that we will be able to stage international meets,” he said.
The facility which will be outfitted with a Mondo track, will also have aFédération Internationale de Football Association (FIFA)-certified football field in the middle for the football lovers. 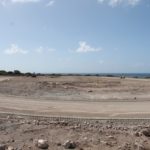 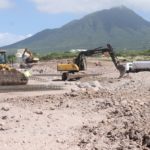 Ongoing works at the construction site of the Mondo athletic track at Long Point on February 08, 2017 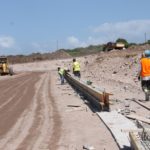 Mondo is a well-known European based company, which is the official surface and equipment provider for the IAAF.
The Minister noted that based on his understanding, Nevis will become the third in the world to use the Mondo high-tech track and the first in the Caribbean at this point to do so.
“I think only the Mini Olympics in London has had this surface and it’s going to be a brand new surface, brand new technology.
“We want the people to understand we are making this investment because we want the absolute best for Nevis,” Mr. Brantley said.
The project began in mid-December 2016 and the planned completion date is in March 2017 in readiness for the annual Inter-Primary School Athletic Meet in April. The second phase of the project will be the construction of the stadium.
However, the Minister noted that in the event the targets are not met, the public should be aware that it is all being done in their best interest.
“If there is some slippage, our focus is to produce a quality track and a quality investment in infrastructure that would serve the people and would serve the youth and the sports loving people of the island for the foreseeable future,” he said.
He said experts from Mondo are expected to visit the project shortly.
The lead contractors for the project, at present, are Surrey Paving and Aggregate Co. Ltd. and Lefco Equipment Rentals and Construction Company Ltd.
Meantime, Michael Morrison Construction Manager for Surrey Paving and Aggregate Co. Ltd.  said the deadline date is challenging and at the moment they had already met 30 percent of their target . They had already engaged in large amounts of earth movements and had begun constructing concrete curbs.
Tim Caines Project Manager expressed optimism that the first phase of the project would be completed on time.
“We started the earth work on December 15. We are currently on schedule for our targeted deadline of March 31. We’ve been having some great weather, if this continues we are confident we will be able to make that deadline,” he said.
Also present on the tour were Junior Minister in the Ministry of Communication and Works Hon. Troy Liburd, Cabinet Secretary Stedmon Tross, Legal Advisor Colin Tyrell, Permanent secretary in the Premier’s Ministry Wakely Daniel and his Assistant Secretary Kevin Barrett
END
Tweet