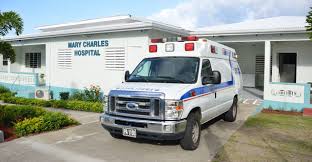 The Following is a statement issued by the Ministry of Health regarding fatal accident over the last weekend.

The Federal Ministry of Health wishes to advise the general public that an investigation was launched on Saturday, July 7th 2018 regarding the response of the Emergency Medical Services (EMS) team of the Joseph N France General Hospital to the fatal accident that occurred on the said day. The management of the Ministry of Health wishes to extend sincere condolences to the family and friends of the deceased.

The Ministry’s investigation into the EMS’ handling of the case on Saturday was spawned by a widely circulated amateur video which partially documents the handling of the case by a two-member team of Emergency Medical Technicians (EMT). The Ministry is rather disturbed by the contents of the video, and on Monday suspended both of the EMT officers who responded to the emergency call. These officers will remain on suspension for the duration of the investigation, with a final determination of their future employment being made by the Public Services Commission (PSC) at the end of the investigation.

The Executive Management Committee (EMC) of the JNF General Hospital has also scheduled an emergency meeting of the entire EMT staff on Tuesday, July 10th 2018 in order to (a) officially document the Ministry’s dissatisfaction and disappointment with the handling of the emergency call on Saturday; and (b) reinforce the Ministry’s demand for the highest standards of professionalism and practical application of skill sets among the EMTs who are well-trained and expected, when called upon, to serve the people of our Country with distinction, compassion and respect.

The Ministry of Health wishes to further emphasize that Saturday’s unfortunate incident warrants an entire retraining and re-sensitization of all EMTs regarding their expected response to emergency calls, in particular those involving accident-related trauma and injuries. This training programme will be immediately implemented.

The Ministry of Health will update the general public at the conclusion of the investigation. Meanwhile, the Ministry sincerely apologizes to the family and friends of the deceased for the conduct of the EMT officers who responded to Saturday’s fatal accident.