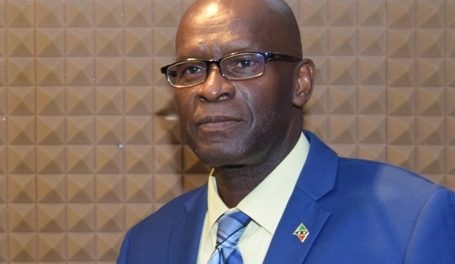 Basseterre, St. Kitts, May 18, 2017 (SKNIS):  The Ministry of Education has embarked on an initiative to enhance the physical plant of schools, as a way of creating a more friendly learning environment, said William Hodge, Permanent Secretary, who appeared on  Wednesday’s (May 17) edition of “Working for You”, to update the public on initiatives relating to Education.

“Some of the work that we have done include the construction of staff bathrooms at the Basseterre High School, as well as toilet blocks for students. We have done some paintings at government-run early childhood centers, and we have repaired a number of roofs at the Edgar T- Morris Primary School – their school is going to look real beautiful when the work is done there,” said the permanent secretary. “We have done some kitchen upgrades at the Joshua Obadiah Williams [Molineux] and Tyrell Williams [Old Road] Primary schools. We have also done some work in upgrading the primary school computer labs in a number of schools. So we have done some work on the physical plants and some are ongoing.”

Mr. Williams added that at present some expansions are taking place at the Sandy Point Primary School with the help of the Basic Needs Trust Fund (BNTF). He said that the auditorium at Cayon Primary School and one of its blocks were renovated.

In addition to the work being done, the permanent secretary said that principals were encouraged to get teachers to decorate the classrooms, “as a way of improving the physical learning environment”.

Earlier this year, the MOE expressed profound gratitude to Lonza’s People Extending a Caring Hand (PEACH) Project for its volunteer work in giving the Estridge Primary School a complete makeover by painting classrooms, repairing cupboards and creating a fruit and vegetable farm. Lonza is one of the world’s leading and most-trusted suppliers to the pharmaceutical, biotech and specialty ingredients markets. It harnesses science and technology to create products that support safer and healthier living and that enhance the overall quality of life.