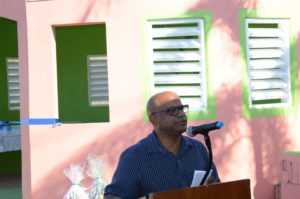 Basseterre, St. Kitts, April 24, 2017 (SKNIS): The official ceremony to unveil the new bus stop at Belle Vue was held on Saturday, April 22, 2017. The idea for the bus stop was the brainchild of Clinton Langley and was adopted by the Ministry of Tourism and the members of the CFBC/ Jenkins Leadership Course 2017 Cohort 5.

The project started on Saturday, February 02, 2017 and was conducted as a weekend scheme until completion. The project included painting, building a step, plastering the walls, paving and the planting of trees in the surrounding space.

“I think I will consider this the best bus stop in St. Kitts right now. This unveiling of the bus stop may look very simple, but I think it is rather significant,” said the Honourable Lindsay Grant, Minister of Tourism, adding that the project brought together 28 young persons in the second level of the CFBC/Jenkins Leadership Course 2017 Cohort 5, who gave of their time and efforts to see it through. “I think it is very important to applaud these (young) people, not only for their time, but for their effort, money and expertise.”

Minister Grant commended contributors to the project including CONTEC, White Gate Development, SKELEC (St. Kitts Electricity Company), Peter Jenkins and Community Tourism Officer in the Ministry of Tourism, Shaline Welcome. Special mention was made of Elis Hazel and the White Gate Development for their investment into the maintenance of Black Rocks and the surrounding areas.

“I believe this is an iconic area in tourism and we need to make sure that we not only maintain it but that it is sustainable,” he added.

Minister Grant encouraged the media to spread the word that “something is happening at Black Rocks” as he mentioned that the Ministry will be spending over a half a million dollars over the next few months to uplift and refurbish the facilities at Black Rocks. He further added that the restoration will be important to allow vendors to feel the benefits of Tourism.

The project is said to be one of many on the agenda for the Ministry of Tourism. It will cover areas like Mattingley, Challengers and others outside of the Basseterre area.