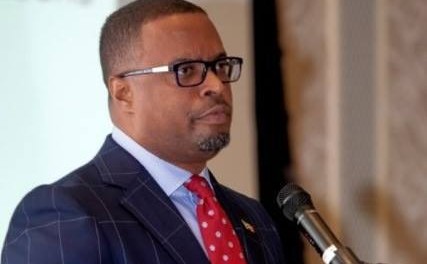 Basseterre, St. Kitts, January 21, 2016 (SKNIS): The Honourable Mark Brantley, Minister of Foreign Affairs and Aviation, said that the Foreign Account Tax Compliance Act (FATCA) is demonstrative of the Federal Government’s seriousness in playing its role in an ever-changing global environment.

He made these comments during an appearance on the Government’s weekly radio and television programme “Working for You” on Wednesday, January 20, and noted that FATCA is an effort of the United States to have other nations around the world assist in their tax collection process.

“They have so far not offered any financial assistance to us to put in place the necessary infrastructure to allow them to do so,” said the foreign affairs minister, while adding that FATCA is necessary because the alternative arrangement for the local Government would be to shut down its financial system.

“We have to be pragmatic in that regard,” he said. “At the end of the day we are all aware that the previous government had equally committed to FATCA. Most of the major countries in the world and all of the Caribbean have already committed to FATCA because the risks to your own financial system are very real, because the United States then reserves the right to apply sanctions if they like.”

Minister Brantley explained the relevance if an act should occur, noting that it would have an impact on people sending monies abroad or receiving. He also explained that this too will have implications on the way business is done.

“Big companies here, who are trading, buying and selling, all of that can be affected,” he said. “You then are affected in terms of how you use the clearing house of the world, the banking system of the world.”

FATCA was signed into law by US President Barack Obama in March 2010 and thus far nine Caribbean countries and territories have already agreed to it.

On August 31, 2015, the Governments of the Federation of St. Kitts and Nevis and the United States of America (USA) signed an Inter-Governmental Agreement (IGA) that facilitates compliance by financial institutions in the Federation with the USA’s Foreign Account Tax Compliance Act (FATCA).

The IGA was signed by Prime Minister, Dr. the Honourable Timothy Harris and the USA’s Ambassador Extraordinary and Plenipotentiary, His Excellency Dr. Larry Leon Palmer, in Barbados. It was observed by Mrs. Sylvia Gumbs of the Ministry of Finance, Saint Kitts and Nevis and Mses. Laura Griesmer and Nicholle Manz-Baazaoui of the US Embassy to Barbados and the Eastern Caribbean.