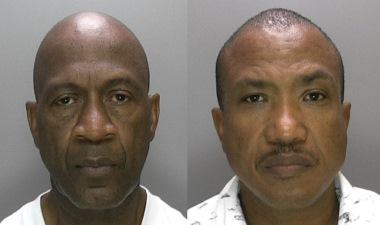 SURREY MIRROR – A security guard for a crown court in London and another man have been jailed after they were caught trying to bring nearly two kilos of cocaine through Gatwick Airport.

Hugh Barrington Wilson, 60, and Orville Campbell, 50, arrived at the airport from St Lucia and had the class A drug, with a street value of more than £180,000, seized from them in July 2016.

When arriving the two men separated as they went through the airport, but were reunited at Gatwick Airport rail station where they were caught.

Officers moved in to arrest the pair as they were queuing to buy tickets for the train, and found the 53 per cent pure drug concealed in a compartment of Wilson’s suitcase.

Following a three-week trial at Croydon Crown Court both were found guilty of importing class A drugs.

Both men denied having any knowledge of the drugs being in their possession.

Wilson, who worked as a private security guard at a London crown court, was sentenced to seven years on Friday (March 24).

Campbell, who claims to live in Edmonton but it could not be established for certain, was sentenced to nine years.

“We often get smugglers who break up before reuniting after going control or customs. So when we suspect an individual of having broken the rules we tail them to see who they may meet with. With good communication on walkies talkies and good observation, our investigators ensure there’s no opportunity for a suspect to slip away. It has been a pretty effective policy and we have found several additional individuals to a crime using this method.

“In this case, Border Force officers had already checked Wilson’s suitcase and confirmed the presence of cocaine. Armed with that knowledge, the NCA investigators were able to tail them and wait until the pair reunited at the station before making their arrests.

“This case is testament to the close working relationship between Border Force and the NCA which is crucial in bringing offenders to justice.”