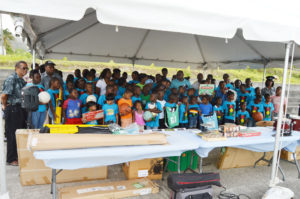 Members of the Mol-Phil Club pose with the donated equipment that they will share with three other Explorers clubs, Shadwell, St. Paul’s, and St. Peter’s.

BASSETERRE, ST. KITTS, April 23, 2018 (PLP PR Media Inc.) — Permanent Secretary in the Ministry of National Security, Mr Osmond Petty, has revealed that his Ministry and the Ministry of Social Services have recently signed a memorandum of understanding to support the Explorers Movement which now has four established clubs.

The Permanent Secretary, who was speaking at the Phillip’s hard court which is the home of the Mol-Phil Explorers Club, noted that there are now four Explorers clubs which will be registered with the Ministry of Social Services for them to benefit from whatever the ministry has to offer, and whatever support it can give them to assist in the development programme for the Explorers.

He made the disclosure at a hand-over ceremony, where Senior Probation Officer in the Ministry of Social Services and head of Probation Services Mr Gerald Connor delivered sports tools and equipment that also included musical band equipment provided by the ministry in its first phase of Juvenile Justice Reform Project (JJRP), to the Explorers Clubs.

According to Mr Connor, the equipment was part of a larger consignment that had been donated to his ministry by the Organisation of American States (OAS).

Mr Petty stated that initially they were thinking of Mol-Phil Explorers Club only but now as they have three more clubs, Shadwell, St. Paul’s and St. Peter’s, the equipment will be shared by all the clubs.

The equipment was officially handed over by Mr Gerald Connor to Inspector Rosemarie Isles-Joseph, Founder and Leader of the Explorers Movement. Also at the ceremony was Pastor Ericson Cumberbatch, Force Chaplain.

“It is a great pleasure that we are fulfilling our part of this memorandum of understanding,” said Mr Connor. “As children we expect that you will grow in a wholesome environment and as such this equipment that you see here today is yours to enhance your talents and also to bring out your hidden talents to make sure that you grow up in a very well caring and conducive environment.”

Imploring members of the Explorers Clubs to make full use of the equipment, the Senior Probation Officer said:  “This memorandum of understanding is not just to give, but to make sure what we give will make you a much better person in life. That is what this equipment and everything is here for. Make sure that you become a better person in life.”