Meghan Markle and Prince Harry’s wedding is months away, and the topics of who will (and won’t) be invited; who will design the dress, ring, floral arrangements, and all that; who will do the catering; and so on, have all been dominating the headlines in the royal-watching press. And now the subject of where they will honeymoon will come up, and one British newspaper is speculating that the pair might head for the secluded Caribbean island of Nevis. 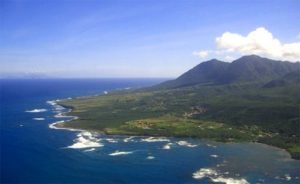 The east coast of Nevis from the air.

As the Daily Star reports, the government of Nevis is hoping the Royal Couple will come to their island for their honeymoon. The CEO of the Nevis Tourism Authority, Greg Phillip, certainly hopes so, anyway.

“As it is one of the most romantic islands in the world, we are quietly confident that Nevis’ guaranteed privacy will attract the royal newlyweds.”

So What Is This Nevis Place All About?

Nevis (the island) is part of the country The Federation Of St. Kitts and Nevis, which itself consists of the two main islands and any number of cays, islets, outcroppings, and reefs. The two islands are in the eastern part of the Caribbean Sea, about 217 miles from Puerto Rico.

Nevis (pronounced “NEH-vis”) is the smaller of the two islands, both in terms of population and in physical size.

Nevis wants prince harry and meghan markle.
The east coast of Nevis from the air. Aaron Vos / Wikimedia Commons
The island is 36 square miles in size (roughly equivalent in size to the island of Manhattan) and is dominated by Nevis Peak, a 3,232-foot volcano described by geologists as “potentially active.” About 11,000 people call the island home.

Like so many other places in the Caribbean, Nevis is home to tropical weather, beautiful beaches, and warm breezes. A tropical rainforest invites exploration, and the volcano, oft gilded in clouds, offers beautiful photo opportunities.

Prince Harry Has Some History There

Harry has been to the island twice, first with his mother, Princess Diana, who had herself honeymooned there, and once on an official state visit.

Way back in 1993, when Harry was nine, he and his brother, William, visited the island on a private holiday.

In 2016, Harry went there on an official state visit. Officially, St. Kitts And Nevis is a Crown Colony, meaning the 56,000 or so inhabitants of the country are British royal subjects, and Harry’s brother William will likely one day be their King (at least, ceremonially).

As of this writing, any speculation on where Prince Harry and Meghan Markle will spend their wedding is just that — speculation, and they have not officially announced where they will be spending their honeymoon.