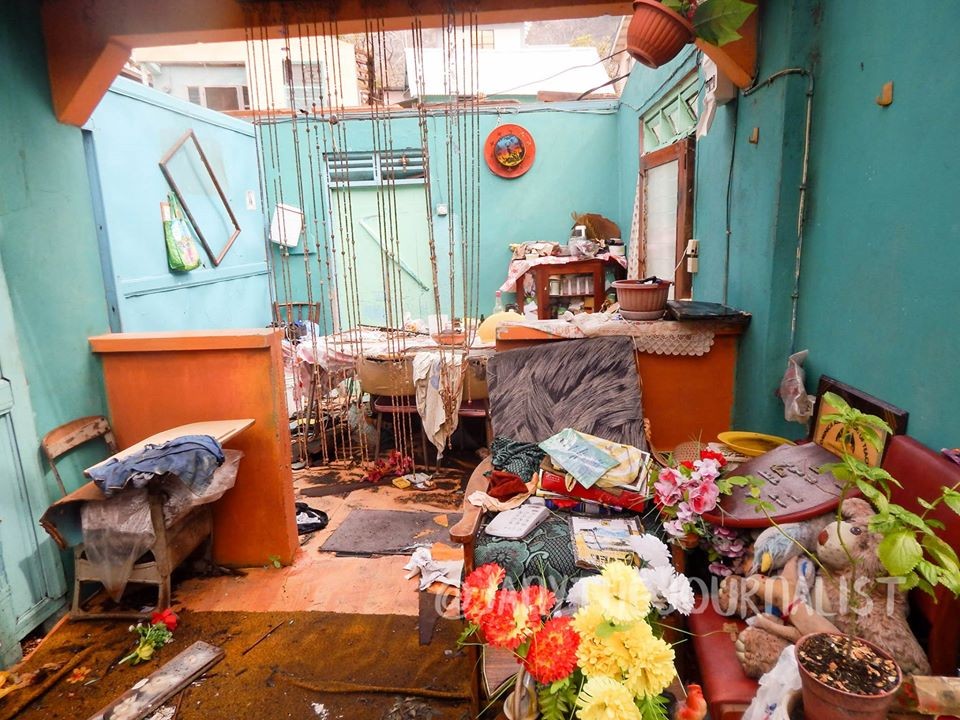 Soufriere was but a brief stop for the soldiers, as their primary mission was a food drop deep in Kalinago Territory, where as of Friday September 29, the day of my visit to the Commonwealth of Dominica, word coming out of that area had been scarce.

Soufriere’s portion of the cargo was quickly unloaded and soon the aircraft was aloft, leaving two of us next to a pile of canned meats, powdered milk and other assorted foodstuffs, as a small group of residents peppered us with questions and complaints.

I was accompanying Dr. Patrick Antoine, Grenada’s ambassador to OECS and CARICOM, on a mission to deliver critical medicine supplies to a shelter in the village. Elderly villagers whose homes had been damaged or destroyed by hurricane Maria were being housed there. The OECS had collected, in Saint Lucia, a 3-month supply of prescriptions for those with urgent or chronic medical needs, and Dr. Antoine was charged with its delivery.

The Saint Lucia Hotel and Tourism Association, who purchased the food supplies that were destined for the Kalinago Territory, had also assigned some to be delivered to Soufriere as well – those were the supplies that were loaded into a truck that had materialized, while Dr. Antoine tried to reassure the anxious people.

A News 4 cameraman ducked in and out of the crowd. Overwhelmed, I walked away from the clamor and waved to two boys on the fringe. They waved back, shyly. They didn’t say much during our brief conversation, but one question in particular elicited an immediate response.

I jumped across several rivulets of briskly moving water on my way to the truck, which was now starting to move. Dr. Antoine and I hopped up onto the back of the truck with the food and medicine. As we left the landing area, one of the truck guys remarked nonchalantly,

“This used to be a playing field, you know.”

As I squinted down at the dry riverbed covered with mud, grainy sand, and smooth pebbles, he continued.

“The river came up and dropped all of this, the grass is underneath.”

When the truck pulled up at the Soufriere Christian Union Church, I spotted several of the same people who had greeted us near the helicopter. It was no surprise they’d manage to arrive before us, the truck had to carefully transport the precious vials of insulin that were part of the manifest on muddy roads made narrower by the accumulation of debris along the sides.

Again, they entreated Dr. Antoine to ensure the equitable distribution of emergency food relief. The stockpile on the truck was split – the shelter’s share was offloaded and stored near the church’s kitchen, while that meant for house-to-house distribution was transferred into a minibus whose windshield and windows had been blasted out by the hurricane. All the vehicles I saw that day had sustained some kind of damage from the storm. Windshields and headlights seemed to have borne the brunt of Maria’s fury.

The bus made a slow circuit of Soufriere, stopping so many times that the scenes began to blur together. Here, a woman washing laundry in a too-small basin stops and dries her hands to accept some cornflakes and milk. There, a man beckons me inside his house while his wife deals with the supplies. My nostrils fill with the smell of mud, of damp. A fallen ceiling propped up by a piece of wood causes me to duck as I look in on a room that had stayed dry throughout the storm. On the bed, his wife’s stepmother lies motionless,” a feeding tube snaking across her face.

As we bent our heads again, this time on our way out, he tells me,

“She couldn’t be moved to the shelter, so we had to stay.” “I slept on the couch,”

He continued, pointing to a sodden wooden settee, almost tucked away under the most steeply sloped part of the ceiling that had fallen into their living room.

Examples of catastrophic structural failure were everywhere. Rafters, covered since the time of initial construction, looked almost like they were newly installed. Only upon closer inspection could one find evidence of where the sheets of galvanize had been ripped away by the winds shrieking past at over a hundred and eighty miles per hour. One wooden house had a whole wall fall away from the rest of the structure, leaving internal rooms exposed like a child’s dollhouse.

House after house was compromised to some extent – a few sheets peeled away here but an entire roof missing over there. The insides looked much the same, though. Once the wind had forced it way into a structure, it tossed the place completely, flinging around the contents of every house with abandon.

After the food supplies were exhausted, the bus returned us to the shelter, from which point we walked down to the waterfront, or “Bayside” as it is known locally. There, driftwood was piled thickly along the street that ran along the water, including inside yards and porches. It was apparent that heavy machinery had been employed to create a narrow drivable path among the debris. A digger stood motionless atop a pile of sticks, logs and whole trunks, one tread ripped off its oblong track and hanging uselessly to one side.

The Soufriere police station is located in a yellow house on the waterfront, adorned with a national flag and a simply lettered sign. Officer-in-Charge Titre and the chair of the village council sat down with Dr. Antoine for an impromptu strategy meeting. The room was tense, as Dr. Antoine discussed the sentiment of many villagers that hurricane relief distribution was not happening in an equitable manner.

The council chairman explained that the first few days on the ground were chaotic.

“It wasn’t really organized as now,”

He reflected, before going on to describe how the village had since been divided into zones, and the needs of families in each zone had been identified. Office Titre outlined the extreme logistical challenges faced by the villages under his care.

Due to the geography, communications by satellite phone, cellular phone and even two-way radio were minimal to non-existent. He had no way of knowing when supplies were coming, or how much. Unable to deploy the four men under his command, he was thankful that Soufriere’s security situation had stabilized after the first few days.

“Even though there is a curfew, I can’t enforce it here.”

Walking to our next location took me back through the village, up towards the old estate house. There, we were supposed to eat whatever we’d packed for the journey, rest a little, and wait for when we needed to return to our extraction point (as I’d taken to calling it). Clambering over two fallen imperial palms which were blocking the driveway, I took advantage of my elevated location to look out towards the sea. Turning my back on the blackened mountainside, I looked towards a large vessel anchored some way out. Two inflatable dinghies sped across the water, making another of countless trips to ferry supplies ashore. The percussive sounds of hammering and the droning buzz of chainsaws echoed off the blasted hillsides, creating a soundtrack of reconstruction for Soufriere.

I set down my camera and rummaged in my bag for a can of sardines. I extracted a tin of fish. “Packaged in Louisiana hot sauce,” the label advertised. As soon as I cracked the lid open, a smiling black and white face poked its head around the corner of what used to be a fenced kitchen garden. A wagging tail soon followed as the dog came towards me, grinning and prancing in deference. I noticed scrapes along his flanks and clucked. Not even the pets escaped the effects of the hurricane.

I sat on the kitchen steps and ate silently, looking down the driveway where now two young men attacked the fallen palms with chainsaws, slicing chunks and hefting them out of the way. One of them disappeared and soon returned, bearing two orange coconuts.

“These are the last ones,”

He said as he cut the customary hole in the side of the nut.

Leaving the last sardine for my new canine friend to enjoy, I took the coconut and drank deeply. I felt honored and not a little guilty. Here I was, about to get on a helicopter and fly back to safety and hot showers, drinking the last bit of luxury that my benefactor would have available to him for the foreseeable future. At that point, I began to wonder what it would take to restore the Nature Isle to its former splendor. How many decades? How many billions? In the face of the devastation I witnessed, the number seems incalculable, even infinite.

The tenant of the estate house was kind enough to offer to take us back to the rendezvous point when it was time to go. Feeling another twinge of guilt that he would spend some of his limited fuel on ferrying me around, I was nonetheless grateful that my aching legs would be spared. I rode in the back, ducking under sagging electrical wires. My final look at Soufriere was an expanse of land at the base of a mountain.

“This used to be a three-and-a-half acre cocoa farm. Cocoa and plantains, there were lots of fruits on the tree before the hurricane,”

Our driver informed us.

The helicopter’s approach was a welcome sound. Pressed for time, the pilot kept the rotors spinning as Dr. Antoine and I jogged towards the aircraft. Gritting my teeth against the hot air venting from the exhaust, I clambered aboard gratefully, looking forward to my imminent return to a country that still had trees, electricity and running water. The space previously occupied by emergency relief supplies was now filled by several people making their escape from the apocalyptic conditions they lived through during the previous fortnight.

As we pulled away towards the ocean, I closed my eyes and let vignettes from my day flash through my memory. The sights I witnessed, and the stories of the people I met, all left me with one overarching impression. All the work involved in coordinating this trip was just a drop in the bucket. Dominica has been completely devastated, and her citizens urgently, desperately, need our help.