PRESS RELEASE – Organizers of the annual Saint Lucia Jazz & Arts Festival proudly announce that the headliner for the 10 day event will be Marc Anthony, the top-selling tropical salsa recording artist of all time.

The Grammy award winning Latin singer, with 25 Billboard chart hits, was inaugurated into the Billboard Hall of Fame in 2012. He is scheduled to perform on Sunday, May 8th as part of the festival’s main stage performances.

The Latin influence in the 25th anniversary of the Saint Lucia Jazz & Arts Festival will be highlighted and celebrated as the Saint Lucia Tourist Board (SLTB) begins working collaboratively with the Latin dance community – in particular Salsa Saint Lucia. The 3 year old organization seeks to promote fitness, health, social development and cultural diversity on Saint Lucia through Latin dance and music. 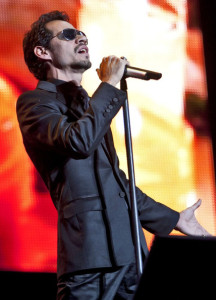 The addition of Marc Anthony to the lineup will be a collective celebration on Friday, January 29th, 2016 when highly popular Salsa Saint Lucia kicks off a series of specially themed Salsa parties at blu Hotel in Rodney Bay, commemorating the music of the Grammy award winning Latin sensation.

“We will be reaching out to the regional Latin dance community to join us and the massive following of Salsa Saint Lucia for the Festival in May,” notes Tracey Warner-Arnold, Deputy Director of Tourism and Head of Marketing at the SLTB.

“In the lead up to the Festival, there will be a number of Latin dance parties hosted by Salsa Saint Lucia celebrating the music of Marc Anthony and the 25th anniversary of the Saint Lucia Jazz & Arts Festival,” says Peter St. Rose, founder and lead instructor of Salsa Saint Lucia.

At its 25th anniversary milestone, the festival will pay homage to what has been an unforgettable journey that now distinguishes it as the Caribbean’s longest running international music and Arts festival. The selection, therefore, deliberately combines past performers deemed by patrons to be among their most memorable, mixed with contemporary chart-toppers.

Interested attendees can purchase tickets from February 1st, 2016 via http://stluciajazz.org/tickets/

The ten day festival runs through May 8 and will feature a multitude of musical performances and art showcases throughout the island. Locations span from Saint Lucia’s iconic Pigeon Island National Park, where main stage events will kick-off on Friday, May 6, to various other venues island wide.

With a continued emphasis on the arts component of the festival, a tribute to Sir Derek Walcott – one of Saint Lucia’s two Nobel Laureates – will be presented through the play Omeros produced by Shakespeare’s Globe Theatre, London. An Arts Village with a dedicated site in the north of the island will feature literary, visual and performing arts, while the acclaimed fashion show, “Hot Couture,” will return with a spotlight on Saint Lucia and the region’s cutting edge style.

Presented by the Saint Lucia Tourist Board, the festival continues to attract some of the most recognizable and sought after names in the music business and has become a magnet for visitors from the U.S., according to Theophilus. Completing the line-up is a string of other local entertainers, together with more than 100 local artisans, who will perform at jazz venues island wide throughout the festival.