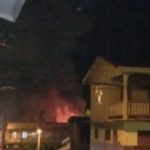 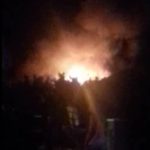 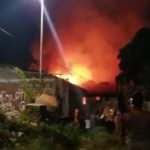 SOUFRIERE, St Lucia — The Soufriere Hospital in Saint Lucia was yet again the scene of another fire within one month as a major blaze raged at the rear of the facility on Saturday at around 7pm, causing extensive structural damage and the loss of vital pieces of equipment and supplies.
Another fire occurred last month on November 14; however, swift action by staff, residents of Soufriere and fire officials quickly arrested the first fire, which caused little damage to the facility.

Chief medical officer (CMO), Dr Merlene Fredericks, and other senior health officials arrived on the scene to assess the extent of the damage and to put in place an emergency plan of action for the continuation of health services to the people of Soufriere and surrounding areas.
“We lost the mental health section, the maternity section, a fully stocked storeroom with medical supplies. We also lost some new 10th European Development Funded equipment,” Frederick said.
Investigations have began into the cause of the fire and though the primary healthcare section of the hospital was not damaged, all salvageable items within the facility will immediately be removed and relocated until both the investigation and an assessment of the damage has been completed.
The CMO also reported that the Pan American Health Organization (PAHO) has been alerted about the fire as replacement supplies and equipment may need to be procured.
The minister for health and wellness, Senator Mary Isaac, said that her health team is moving swiftly to relocate all services that were offered at the Soufriere Hospital.
“Our medical team is doing their best to ensure that services offered at the Soufriere Hospital continue uninterrupted at different facilities. Counseling services will be made available to anyone who may be traumatized as a result of these events,” Isaac said.
Meanwhile, principal nursing officer (PNO), Kerthney Surage, outlined the immediate plan of action for the continuation of services at alternative locations in the district.
Surage confirmed that, due to the latest fire, the Soufriere Hospital has been decommissioned and the current arrangements put in place are temporary until a longer lasting solution is arrived at.