Port of Spain, Trinidad (Trinidad Guardian News January 29th 2016):- Lockhart Sebastien is expected to be named manager of the West Indies team for the upcoming T20 World Cup in India. Sebastien is among three candidates shortlisted by the human resource committee of the WICB. The two others are Ricky Skerritt and Dwain Gill.

Gill is currently managing the West Indies Under-19 team at the World Cup in Bangladesh and hails from Grenada. Skerritt is a former government minister in St Kitts/Nevis. He is also a former manager of the West Indies cricket team. 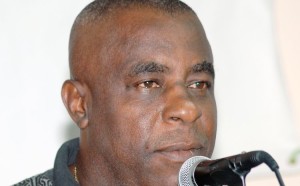 Sebastien, the former Windward Islands opener who is also manager of the Windward Islands Volcanoes, is front runner for the post and is likely to accompany the team to the World T20, which will be led by Darren Sammy.

With just a few weeks before they fly out to India, the team is without a manager. The West Indies go into action on February 16 against England at Mumbai.

The manager’s vacancy followed the appointment of former West Indies batsman Richie Richardson to the International Cricket Council (ICC). The 53-year-old is now a match referee with the world body and left the team after the second Test of the West Indies/Australia series at Melbourne towards the end of December.

Since then, the WICB has received applications from several individuals. This was narrowed down to seven and then three. Among the seven were two directors of the WICB, Joel Garner the president of the Barbados Cricket Association (BCA) and Julien Charles, president of the Windward Islands Cricket Board of Control (WICBC). The two did not qualify for the job because of their roles as WICB directors.

The West Indies are highly favoured to win the title in India, as their team is packed with T20 stars. Apart from Sammy, they have world beater Chris Gayle and all rounders Keiron Pollard and Dwayne Bravo. Top ranked T20 bowler Samuel Badree and mystery spinner Sunil Narine are also included in the team