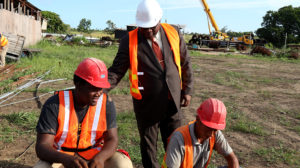 BASSETERRE, St. Kitts, June 22, 2018 (Press Unit in the Office of the Prime Minister) – Construction work on phase one of the high-end St. Kitts Ramada Resort, which is being developed by Caribbean Galaxy Real Estate Corporation, is progressing at an impressive rate.

That view was expressed by local stakeholders, including Prime Minister Dr. the Honourable Timothy Harris, who received a firsthand look at the progress being made on the 273-suite resort during a tour of the facility on Thursday, June 21.

Commenting on the development of the project, Prime Minister Harris said, “I think from what we see as we pass the street nearby and what we see on site is that the project has taken on a new life and today there is considerable activity on site of which we are happy and we hope that that will continue. Having spoken to the relevant parties, including the representatives here for the Building Board, it would appear that the project is going smoothly and we would want for that to continue.” 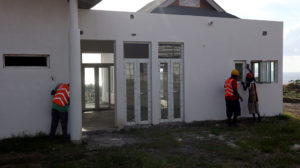 The prime minister continued, “The Ramada project has our full support and over the last three years or so we have seen this project renewed as it was in terms of now having the Ramada brand being attached and we have seen improvements in the construction on this site, so generally there is a feeling of satisfaction.”

The St. Kitts Ramada Hotel is an approved project under the Citizenship by Investment (CBI) Programme. Chief Executive Officer of the Citizenship by Investment Unit, Mr. Les Khan, who accompanied Prime Minister Harris on the site visit, stated that the Ramada project has been one of the more active projects under the CBI programme over the last few years.

Mr. Khan added, “The most applications in real estate has come from this initiative and it continues to be a driver in our real estate success. We look forward to the second phase and with the splits that we are offering we expect much more interests coming in this project and all the other projects that are applying for the split in real estate.”

Also on hand during Thursday’s site visit of the St. Kitts Ramada Hotel was the CEO/Managing Director of the Whitegate Development Corporation, Mr. Ellis Hazel, who also expressed satisfaction in the level of work completed to date on the project.

“Whitegate is satisfied with the progress that is being made on the project at this point in time. We are satisfied that the initial eight acres is at an advanced stage of development and that the developer has been meeting the obligations as per the development agreement. We are also pleased that the developer has showed confidence in the government and in the people of St. Kitts and Nevis with the view to expand the project and to deliver a further two hotels in the not too distant future,” Mr. Hazel said.

Leading the tour of the facility was the CEO of Caribbean Galaxy Real Estate Corporation, Ms. Ying Jin, who personally thanked Prime Minister Harris and his Team Unity Government for its continued support of the project.