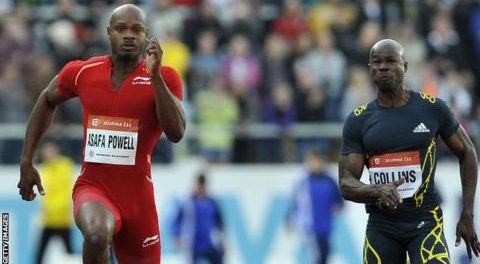 Former 100-metre world record holder Asafa Powell and 2003 World Champion Kim Collins will take on veteran American sprinter Justin Gatlin over 100 metres when the Diamond League kicks on in Doha, Qatar on  May 5.

The three veterans will face stern challenges from Andre De Grasse, the 22-year-old Canadian who win bronze in the 100 metres in Rio last summer as well as silver in the 200 metres. Also confirmed for the blue ribbon sprint is the exciting hometown boy and Asian record-holder, Femi Ogunode.

But while the 100m promises to be a memorable clash between the old and new generation of elite sprinters, several other events also hold great promise for quality performances from some of the world’s best.

Rio 2016 Olympic Champions Christian Taylor and Kerron Clement will be amongst a total of 10 global medallists that will star in the men’s triple jump and 400m hurdles.

Clement will be up against new sensation Abdulrahman Samba and Rio 2016 Olympic silver medallist, Bonface Mucheru of Kenya.  The 21-year-old Samba stunned the world in South Africa just last week when he ran a world-lead time and a huge personal best of 48.31 in just his third race at this distance.

The men’s triple jump promises yet another exciting competition when all three Rio 2016 medallists – Christian Taylor, Will Claye and Bin Dong – meet again.

The USA’s Taylor has been in unstoppable form in the triple jump over recent years and last year became the youngest back-to-back winner of Olympic triple jump titles following his victory in Rio.

The 2015 World Champion has won the last five successive overall IAAF Diamond League titles and will be looking to win his third Doha Diamond League crown.