The Town Council is the municipal government that is the legislative body with executive oversight and oversees all functions of government including municipal employees, police, fire, schools, infrastructure and all related functions and activities of the municipality.

In a facebook posting, Clifton said “Thanks to my fellow Kittitians and Nevisians whose love and encouragement I have felt across the Caribbean ocean.”

Councillor Clifton also expressed his gratitude to his constituents whose support and confidence, he said, has never wavered.

He also expressed gratitude to his family, near and far, without whom he said he was nothing.

Councillor Clifton said that the challenges he intends to tackle in the new term include keeping property taxes affordable, improving the schools and maintaining public safety.

“I am confident that if we are united as a community and we work together, no problem would be insurmountable,” he said.

Kenrick Clifton is a former 400-meter national record holder and a former Permanent Secretary in the Government of St. Kitts and Nevis.  He was also the Featured Speaker at the 50th Golden Anniversary Convention of the People’s Action Movement held in June this year. 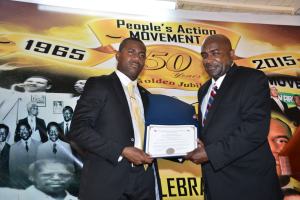