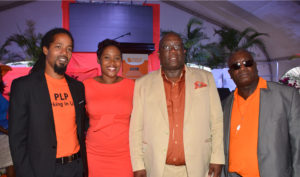 BASSETERRE, ST. KITTS, April 9, 2018 (PLP PR Media Inc.) — The Peoples Labour Party’s (PLP) second annual National Convention held in West Basseterre on Saturday March 24 had all the hallmarks of the greatest political event that would have taken place in the history of the Federation of St. Kitts and Nevis.

While that was the general consensus by the people on the ground, the Kittitian Diaspora was officially represented at the historic event by four prominent members of the Diaspora, three who were making their debut appearance at the Peoples Labour Party platform. They were publicly acknowledged by the PLP’s National Political Leader and Prime Minister of the Federation of St. Kitts and Nevis, Dr the Hon Timothy Harris.

Saying that Team Unity was a national family, Prime Minister Harris stated: “This, my Family, is the essence behind how our Team Unity Movement is intended to function. Many colours representing the different political parties but one movement: Team Unity for all of our people regardless of their political affiliation. That is why Lennox Liburd is here standing with us today. That is why Anthony Ross QC is here and Dr Anthony Sebastian is (also) here today.”

Mr Lennox Liburd, Mr Anthony Ross, and Dr Anthony Sebastian are Kittitians living in North America, who were making their debut at the PLP’s National Convention. Also present at this year’s convention was Mr Alva Pemberton who is Team Unity Administration’s Diaspora Affairs and Programme Officer in North America, who had attended the inaugural convention held last year in Tabernacle.

Mr Anthony Ross QC and Dr Anthony Sebastian both who came from Canada were two of the first in the Diaspora to publicly endorse the Peoples Labour Party, and at the convention when given the opportunity to bring fraternal greetings they both praised the outstanding leadership of Prime Minister Harris.

Mr Ross is a popular black lawyer in Canada, who has made a name through the advocacy role he plays in the preservation of Canada’s cultural heritage. He has been dealing in class action lawsuits representing the country’s aboriginal communities.

He is no stranger to the local political landscape in the Federation. At the Convention he recounted that in 1980 he contested the general elections on a PAM ticket running against the Hon Joseph Nathaniel France for the Basseterre West seat. Having seen and heard Senator the Hon Akilah Byron-Nisbett, he commended her candidacy to the people of West Basseterre and extended best wishes to her.

On the other hand Dr Anthony Sebastian, who is the son of the Federation’s former Governor General the Late Sir Dr Cuthbert Sebastian, is a popular medical practitioner in Canada. He runs one of the largest family practice in Toronto, Ontario.

Mr Lennox Liburd, better known as the Mayor of Cayon, is one of the most respected political activists in Cayon and for years who organised massive turnouts for public meetings organised by the Hon Eugene Hamilton.

“Dr Harris I want to commend you for the work you have been doing in this country,” said Mr Liburd. “I want to commend the Team Unity Government for what they have been doing in this country so far. We are now in West Basseterre, Hon Senator (Akilah Byron-Nisbett) I want to wish you all the best whenever you are called upon and all I have to say is – thank you, and thank you very much.”

When Mr Alva Pemberton took to the podium, he praised the Peoples Labour Party’s wisdom in holding the convention at an open auditorium on the Patsy Allers Playing field in West Basseterre noting that it was sending a clear and unprecedented message that PLP would reclaim Constituency Number Three for Team Unity at the next general election.

“The Peoples Labour Party under the leadership of our God-fearing Leader, Dr the Hon Timothy Harris, is doing great,” concluded Mr Pemberton. “As Prime Minister he is outstanding. Our country is envied by others around the world because of his work. Our Prime Minister has the vision and foresight! Let’s follow his direction.”