KIERON Pollard has been lashed for a petulant display of poor sportsmanship described as “the lowest act seen on a cricket field”.

KIERON Pollard has been slammed for an alleged display of poor sportsmanship in the Caribbean Premier League (CPL).

The West Indies all-rounder captained the Barbados Tridents in their loss to St Kitts in the domestic T20 tournament, but he tried to end the match with a personal win of his own.

Chasing 129 for victory, the St Kitts and Nevis Patriots wrote themselves into the record books as Pollard ensured the match finished on a sour note. St Kitts thrashed its opponents by 10 wickets as Evin Lewis did what few people have ever managed to do by outscoring opening partner Chris Gayle.

The pair made CPL history by recording the tournament’s highest ever score in the powerplay (106 runs in six overs) while Lewis scored the competition’s fastest ever half century off 19 balls.

But the real talking point came when Lewis was on track to reach triple figures. Scores were level in the eighth over and the 25-year-old was three runs shy of his century, needing a boundary to score his ton and secure the win.

But Pollard bowled a no ball, denying Lewis the chance to raise his bat for the second time and gifting St Kitts the win. Some within cricket circles accused Pollard of bowling the no ball on purpose given his foot missed the line by a sizeable margin. 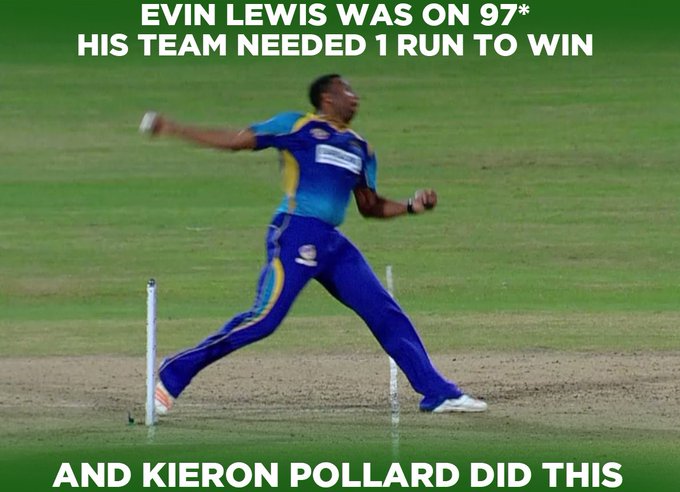 Former New Zealand fast bowler Danny Morrison was commentating the match and had his say on the matter.

“(Lewis’ innings) deserved a hundred and I’ve got to say, as positive and excited as I am, it’s a pretty disappointing way for Pollard to finish the game,” Morrison said.

Cricket statistician Ric Finlay was one of many who were scathing in their assessment of Pollard’s act. 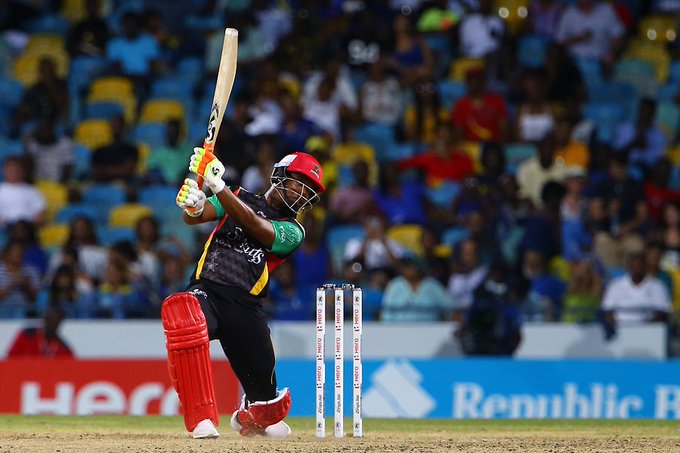 Writing for ESPN Cricinfo, Peter Della Penna called the incident “an anticlimactic and unsportsmanlike end to Lewis’ whirlwind knock” while TVNZ referred to the moment as a “disgrace” and “poor show of sportsmanship”.

Lewis was disappointed at not being able to reach his milestone but was still happy with how his day panned out.

Pollard’s questionable decision revived memories of Sri Lankan bowler Suraj Randiv sending down a no ball to concede defeat in an ODI against India in 2010, denying Virender Sehwag (who was on 99) the chance to score a ton.

But just because he didn’t rack up a triple digit score, it doesn’t mean Lewis’s innings will be forgotten in a hurry. He cracked 11 sixes and six fours in his stay at the crease as no bowler was spared from the carnage.

Ex-West Indies international Dwayne Smith had the best economy rate of the helpless Tridents bowlers, bowling one over for 13.

St Kitts has ended the group stage of the tournament in second place behind the Trinbago Knight Riders.