Charlestown, Nevis (Thursday March 10th 2016):-The Jury in the Inquest into the shooting death of young 17 year old Cricket phenom Philo Wallace was ruled justifiable homicide . The 5 panel Jury all voted for the Not Guilty verdict except for One.. According to the inquest as well as based on evidence submitted and reviewed the accused Police Officer Zaviel was trying to quell an altercation in which the aggressor in the altercation was taken outside. In the process of taking the aggressor on the outside evidence shows that Zaviel was attacked by a group of individuals who were all patrons at the establishment in which the incident occurred.  Zaviel stated that he was hit in the head by a bottle,  beaten and  grabbed around the waist . Instinctively it seems Officer Zaviel grabbed his weapon as to secure it from the aggressors who at this time, according to evidence, was beating the Officer.  Zaviel said he pulled his gun thinking they might get his gun. Subsequently he looked up and according to his statement he saw somone about 6 feet away aiming an object at him. Fearing for his life Zaviel shouted and then fired a shot at the person who was Phillo Wallace. A number of persons who were at the scene of the incident gave very similar accounts of the incident which no doubt influenced the jury which was made up of ordinary citizens to return the almost unanimous NOT GUILTY verdict. 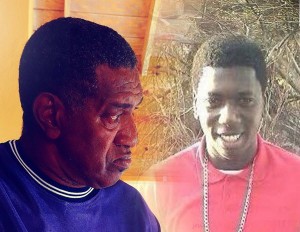 Father Raffie Wallace continues to suffer in pain over the loss of his beloved son.

Wallace was a promising star batsman who played for Nevis’ youth team and senior team, and the Leeward’s youth team.  He was the most prolific run scorer in the Leeward Island Youth Tournament in 2015.

He was the son of Nevis Cricket legend Rapheal “Raffie” Wallace.