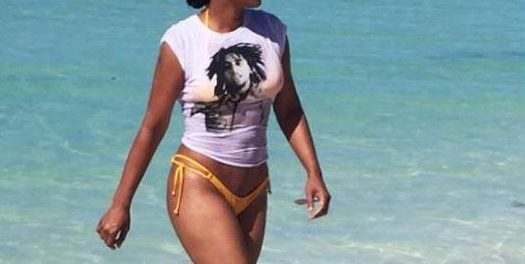 Basseterre, St. Kitts, January 1, 2018 –Lisa Hanna, is the guest speaker at a New Year’s Gala event, hosted by the Opposition Leader and Leader of the SKN Labour Party Dr. Denzil L. Douglas.
The annual event takes place this coming Friday 5th January 2018 in the Grand Ballroom of the posh St. Kitts Marriott Resort at Frigate Bay. The Gala begins at 6:30 pm.
The beauty queen turned politician sent social media into a frenzy last year when she shared a photo of herself showing off her body on a beach in a bathing suit and wet t-shirt.
“No place I’d rather be as I Give thanks for another year today,” Hanna wrote in the caption.
In the picture, she is seen wearing a daring black string bikini while walking on the beach.
On Facebook, the post racked up nearly 2,000 social shares and 2,000 comments, including both birthday well wishes and complimentary messages about Hanna’s gorgeous looks.
Hanna was the 1993 winner of the coveted Miss World title, the last such success for Jamaica on the international stage.
A member of the opposition People’s National Party (PNP), Hanna currently serves as Member of Parliament for Saint Ann South East, and was Jamaica’s Minister of Youth and Culture from 2012 to 2016.